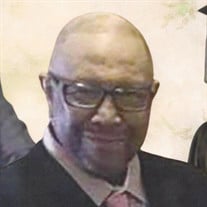 Lash Gyrome Henning (called Gyrome by most who knew him), was born on August 8, 1954, in Denmark, Tennessee, to the union of Colonial and Pearline Henning. Gyrome was the second of twelve children. Gyrome moved to Milwaukee, Wisconsin at an early age. He was baptized and received his spiritual nurturing at Greater Galilee Baptist Church. He was educated in the Milwaukee Public School System and was a graduate of North Division High School. After graduating high school, he worked at Falk Corporation, with his Dad, as a crane operator for 15 years. Gyrome had several other jobs prior to his job at the Residence Inn where he retired. He was joined in holy matrimony to Elaine Stump on May 17, 2019. Although their marriage was short in calendar days, the love he had for his wife was demonstrated many years prior to the day they became husband and wife. Gyrome had a caring and humble spirit. He knew all his relatives and was a frequent visitor. He kept the family abreast on what was going on with their extended family members. Gyrome would be the first attendee to arrive to a family event. Anyone who knew him was familiar with his quiet demeanor, smile and hugs. He loved horses (like his Grandpa Curtis), fashion (the hats, like his Mom), rap music (especially when his grandson Treveon was the artist), traveling and eating. He also loved hanging out around the grill with his brothers and playing games of chance, especially dominos. He would yell out, "Ten times a lady" as he won the game. He was an avid Packer fan and enjoyed the Packer parties. Gyrome was known by many nicknames such as: Romie Rome, Jeep and Flash. He was a great Papa to his grandchildren and their friends. He was so proud of his years of sobriety, and he had almost 30 years under his belt. Early in the morning on December 17, 2020, God in His infinite wisdom called Gyrome home. He will be missed dearly by all who loved him. He was preceded in death by his parents: Colonial and Pearline Henning; sister: Darlene Green; brothers: Contorder and Christopher Henning; and grandparents: Tiller Smith, Joe Patrick, and Curtis and Liza Henning. He leaves to cherish his memories: loving wife, Elaine; children: Antoine (Francena), LaKeyla (Clarence, [r.), and Mocadavius (Lakhonda), six grandchildren: Angel, Clayvon, Treveon, Shara, Tanesha and LaStar; two stepsons: Vincent (Sandra) and Julian (Ebony); eight siblings: Gregory (Ave), Terry (Jennifer), Emily, Christine (Brian, Sr.) Antonion (Brenda), Royna, Vanesser, and Jill (Jerry); two aunts: Lou Callie and Patricia (Clinton); two uncles: James (Emily) and Worthen (Ora); brother-in-love; Paul Green; three sisters-in-love: Tina Henning, Devra Ellis and Carolyn Stump; 28 nieces and nephews; 42 great nieces and nephews; and a host of cousins and friends.

Lash Gyrome Henning (called Gyrome by most who knew him), was born on August 8, 1954, in Denmark, Tennessee, to the union of Colonial and Pearline Henning. Gyrome was the second of twelve children. Gyrome moved to Milwaukee, Wisconsin at an... View Obituary & Service Information

The family of Mr. Lash Gyrome Henning created this Life Tributes page to make it easy to share your memories.

Lash Gyrome Henning (called Gyrome by most who knew him), was...

Send flowers to the Henning family.