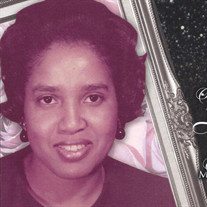 Lela Mae Chesser Vernell was born on June 20, 1941 in Amite County (Magnolia), Mississippi. She was the eldest daughter of Jewel and Mary Chesser. The eldest sibling of eight, she was more than comfortable being the boss. Lela was a member of Jerusalem Baptist Church and was baptized there at an early age and continued to be a financial supporter of her home church until her death. Her relationship with the Lord was her defining characteristic and because of her faith in God and generous nature, she leaves an amazing legacy in the earth. Born with a degenerative hip disease, Lela was disabled from the age of 11 and did not let it deter her from one single thing she wanted to do in life. Lela endured a lifetime of surgeries, rehabilitations and challenges and fought them all head on. She left Mississippi during her senior year in high school and moved to Baton Rouge, LA to be loved on and reared by her mother's only sister, the family's beloved aunt and her namesake, Lela McGhee aka "Auntie". This move would prove to have life-changing impacts. As a senior, Lela attended Capital High School in Baton Rouge and later attended the family's most-attended HBCU, Southern University. While living with "Auntie", Lela caught the eye of her next-door neighbor and class president, Raymond Vernell, Sr., and the rest as they say is history! Lela and Raymond were married at Shepherd Air Force Base in Wichita Falls, TX on January 17, 1962. Lela and Raymond lived in Texas, Louisiana, Ohio and finally settled in Milwaukee, WI. To this union were born Raymond Vernell, Jr, Rodney Vernell, and the baby girl and only daughter Karen Vernell Williams, the author of this life story. Raymond and lela were career civil servants and raised their kids to respect education, intelligence, and hard work. They mostly listened. Lela had a twenty-year career in education with Milwaukee Public Schools and was a proud early retiree. Lela was serious about education and everyone who knows her can attest to her summer workbooks, reading assignments, and spelling drills. Lela was a dedicated member of New Covenant Baptist Church, under the leadership of Rev. F.L. Crouther, in Milwaukee, WI for more than 30 years. A Sunday School teacher and Missionary (Ruth Circle), she and her daughter were there several times a week and for many three o'clock programs. Lela relocated to Houston, TX in 2007. In Houston, Lela affiliated with New Light Church while mobile. She was loved on and cared for by that ministry until her death under the leadership of Founders Drs. l.V, and Bridget Hilliard and Senior Pastor, Dr. Irishea Hilliard. On March 11, 2022, Pastor Robert Forbes took great care to pray with her and her family and minister communion to her and her family for the final time. Her last prayers were powerful and full-throated with hands raised as usual. An expert educator in common sense, Lela was an excellent financial advisor, world traveler, cook, baker and mother to anyone who needed love, help, or wisdom. Her commonsense life and financial lessons were shared in two books written by her daughter. Lela LOVED her family and her friends, especially her "OUTSTANDING" son-in-law SANTANA! She stood by her husband, children and friends, no matter what the challenge, even unto death. She had two lifelong best friends, Lee Essie Amos of Nevada and Essie Johnson of Wisconsin. She also enjoyed and loved each one of her grandchildren! She spent her last years as the primary caretaker for Karsan and Kendall after her relocation to Houston and reminded everyone that she was the BEST BABYSITTER! She was preceded in death by her husband, Raymond Vernell, Sr., her father, Jewel Chesser, Sr. beloved son, Rodney Vernell, and two brothers Jewel Chesser, Jr., George Chesser, and beloved aunt, Lela McGhee. Lela leaves to cherish her memory, her amazing mother Mary Chesser (age 96), her eldest son and dedicated caretaker, Raymond Vernell, Jr., son-in law and daughter, Dr. Santana & Karen Williams, sisters, Stella Lockman, Gloria Brown, Peggy Chesser, Charlotte Turner of Baton Rouge, LA and Linda Lathan of Bay Area, CA. Her grandchildren who adore her memory: Lamont Redmond, Raymond Redmond, Yvonne Brown, Leon Redmond Vernell, Robert Redmond, Jamar Redmond, Justin Redmond, Eric Redmond, Rodney Redmond, Yolanda Redmond, Kendra Redmond, Reggie Redmond, Levi Vernell, Aniyah Franks, Karsan Williams, and Kendall Williams, and will miss her tremendously, but will remember her firm instruction, love, and kind heart always. She also leaves a host of loving nieces and nephews throughout the country. Her bonus children who will also mourn her memory and took great care of her in life include John Spence, Kharyhasan Johnson, Trina Johnson, Yetunde Bronson, Monica Simon, Davina Powell, Necole Montford, Lacritia Spence, Delechia Johnson and Dr. Latish Reed. Lastly, Karen's best friend Jeffrey McAlister, Jr. had an incredible friendship and bond with Lela, and she will most certainly be missed by him. There are so many more to name as her love really knew no bounds. Our family would not have made it without the expert nursing team led by Katina DeVaughn, RN and her daughter Pamela Daniel, CNA. These two women loved our mom like she was their own and are now a part of our family always and they cared for her until her last breath. Her last days were spent in comfort and peace. She also took great pride in knowing that her affairs as always were handled and in order. Special thanks to family friend and trusted funeral professional Rewa Durham of Northwest Funeral Home of Milwaukee, WI.

Lela Mae Chesser Vernell was born on June 20, 1941 in Amite County (Magnolia), Mississippi. She was the eldest daughter of Jewel and Mary Chesser. The eldest sibling of eight, she was more than comfortable being the boss. Lela was a member of... View Obituary & Service Information

The family of Mrs. Lela Mae Vernell created this Life Tributes page to make it easy to share your memories.

Send flowers to the Vernell family.