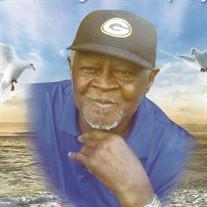 Lemon Bolds [r was born January 18, 1948 in Brownsville, Tennessee to the late Lemon Bolds, Sr. and Lou jennie jackson Bolds. He departed this life on Sunday, December 20, 2020 at 2: 15 P.M. Lemon was a devoted husband and father. He married his wife Sadie Eisom Bolds, January 20, 1968. To this union 5 children were born. God gave him an amazing strength and the abundant gift of Love to take care of them. He devoted his life to his family. Our dad was a self-employed salesman and an educator. He taught us that hard work pays off, that this life is far from easy, that anything you desire you must work hard for and that nothing is handed to you on a silver platter. His main words were, "Time to get up and hustle." He also taught us how to love life, the people in it, that family is always important and the best thing you got, so we should cherish each other. In the words of his granddaughter Chiquita, "My grandpa is the sweetest Lemon I know." Lemon leaves to cherish his memories and legacy to his beautiful wife Sadie Bolds, two sons Marlon Qualls of Ripley, Tennessee and Mark Bolds of Milwaukee, Wisconsin; three daughters Gertrude (Barry) Jones of Ripley, Tennessee, Carla Bolds of Milwaukee, Wisconsin and Monica (Abou) Ly of Milwaukee, Wisconsin and his God daughter Tennelle Worsham of Chicago, Illinois. Numerous grandchildren who he Loved so much: Kim (Dennis) Eisom Taylor, Amber Alexander, Alexis Alexander, Cecil Lemar Alexander, Chiquita (Willie) Robinson, Cameron Bolds, Constance Bolds, Abigail Bolds, Damien Weston, Markeesha Bolds, Markelia Bolds, Mariah Bolds, Jasmine Bolds, Sadio Ly, Halimah Ly, and Mouhammad Ly. Great grandchildren Attris Robinson, Kileah Bolds, Jevon Bolds, Amiriah Robinson, Rashad Wilburn, Debonair Bolds, and LiL Cameron Jr. , Cateria Weston, Zarya Weston, Zoey Weston. Five Siblings in Jackson, Tennessee Gertie (Terry) Smith, McKinley Bolds, Minnie Grant, Willie Bolds, and Betty (Danny) Hunt. He was preceded in death by his parents, Lemon Bolds, Sr and Lou Jennie Jackson Bolds, two daughters Patricia Bolds Alexander and Tina Antonio Bolds and two sisters Hattie Bolds and Emma Lee Bolds. We will all miss you. We thank you for your dedication, your teaching and all of your Love. We will always have the precious memories and moments we shared. You were our King and we're leaning on God to guide us through this time. Daddy we'll always love you. Thank you, God for giving him to US, now you need him back in your Kingdom, so Daddy your journey here is over and now you can accept your reward in heaven. Rest peacefully dad!

Lemon Bolds [r was born January 18, 1948 in Brownsville, Tennessee to the late Lemon Bolds, Sr. and Lou jennie jackson Bolds. He departed this life on Sunday, December 20, 2020 at 2: 15 P.M. Lemon was a devoted husband and father. He married... View Obituary & Service Information

The family of Mr. Lemon Bolds, Jr. created this Life Tributes page to make it easy to share your memories.