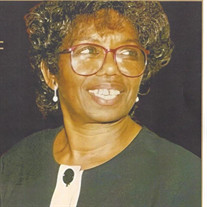 SUNRISE: Lessie Pearl Hollins was born February 4th, 1937, to the union of Ethan Ben Elms, Sr. and Annie Pearl Elm's in Jones, Louisiana. Lessie received her formal education at Union High School in Mer Rouge, Louisiana. Lessie accepted Christ as her Savior at an early age and was united with Mound Chapel A.M.E. Church in Jones Louisiana. SUNSHINE: Lessie was united in holy matrimony with Sylvester Hollins, and to this union was born two children, Michael and Gervette Hollins. In 1956, Lessie relocated to Milwaukee, Wisconsin. Lessie worked in environmental services at St. Joseph's Hospital in which she retired in 1992. Lessie was a member of St. Mark A.M.E. Church where she attended regularly. Lessie loved to cook and share recipes with her daughter Gervette while enjoying "special treats" Gervette would often bring her to share amongst their "coffee conversations" at the white table. Interior painting and attending to her lawn were favorites as well. Lessie was also known best for her love of shopping and her impeccable style. One of her favorite past times was traveling to different casinos with her sisters and if she won, she would share her winnings. Lessie was big on family. She played a key role in her family's life and shared an unbreakable bond with her grandson Terry Hollins, Sr. They were best friends as he referred to her as his "pooh". Lessie also had the opportunity to enjoy her great grandchildren in which they all had their own special unique relationship with her, and the memories created will last them a lifetime. Lessie never met a stranger. Her genuine love for others was displayed during initial conversations as she made everyone feel like family. Lessie was a great mother and grandmother and will be missed by all who had the opportunity to know her. SUNSET: Lessie Pearl Hollins departed this life on Wednesday July 21st, 2021, surrounded by those she loved. Lessie was preceded in death by her parents, Ethan Ben Elms, Sr., and Annie Pearl Elms; her son, Michael Hollins; and her brother and sisters, Ben Elms, Jr., Essie Lee, Roberta Dantzler, Aldean Watson, and Orean Mays. She leaves to cherish her memory: her daughter, Gervette Hollins; grandson, Terry Hollins, Sr. (Kelli); great grandchildren, Terry Hollins, Jr. (Shontele), KJ Hollins, Kayla Hollins, and Taylor Hollins; eleven great-great grandchildren; two sisters, Marion Elms end Dorothy Hopkins; one brother, William (Corene) Elms; and a host of family and friends.

The family of Ms. Lessie Pearl Hollins created this Life Tributes page to make it easy to share your memories.

Send flowers to the Hollins family.