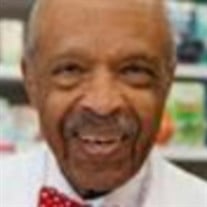 Dr. Lester L. Carter Jr., 90, died on January 31, 2022, of COVID 19. Dr. Carter was born on August 10th, 1931, to Lester and Louise Carter, of Omaha Nebraska. As the only child of his parents with no college education, he joined the Navy. While in the Navy he ran the sick bay on U.S.S. Tortuga, where he gained interest in pharmacy while serving during the Korean War. After the Navy, he attended and graduated pharmacy school from Creighton University. After graduation, he interned at Rexall Drug store in Omaha, where he was hired to make compound prescriptions. A friend urged him to relocate to Milwaukee to advance his career. The job he landed wasn’t to his liking, so he decided to investigate obtaining his own store. He was introduced to Arthur Mehl who owned a pharmacy store on 24th and Burleigh. Arthur Mel sold him the drug store with a handshake, and they worked side by side for 15 years. About two years after relocating to Milwaukee his beloved wife Gertrude died of a brain embolism, leaving him to raise two young children and run a store. He operated Carter Drug for 47 years until a serious health crisis prevented him from running the store. He sold the store to Hashim Zaibak of Hayat Pharmacy. He worked for Hayat Pharmacy for 8 years until his death. In May 2015 he was awarded an Honorary Doctorate of Medical Science from the Medical College of Wisconsin. In 2017 he published Healing the Human Body with God’s Remedies. In 2018 the city renamed 24th street in his honor. Dr. Carter dedicated his life to studying the human body and he provided information and medication to help thousands of people achieve the very best quality of life possible. While he was running the store, a wonderful woman who lived next door to Dr. Carter took care of his two children until he returned home each day. About five years after his first wife passed, he was blessed to marry the love of his life, Irene, who had four children of her own. The couple enjoyed 41 wonderful years together until she passed in 2014 from lung cancer. Dr. Carter is survived by 2 children, Lester “Lee lll (Judy) Carter, Sally (Paul) Woyak and 4 stepchildren, Francis Budelier, Blair (Peanporn) Budelier, Tammi Budelier, Duane (Jacalyn) Budelier, 12 grandchildren, Sara Connerat, Erica Carter, Samantha Talsky, Andrew Talsky, Jennifer Talsky, Mara Carter, Sydney Budelier, Allison Carter, Alisa Budelier, James Budelier, Chanin Budelier, Allen Carter, 8 great-grandchildren, Naomi, Isabella, Lauren, Christopher, Liam, Joseph, Lilly, Konnor, and many treasured co-workers and friends. “When you come into the world, you’re gonna be here a certain amount of years and then you’re gonna leave. Well, you can do one of two things: you can occupy space until you’re ready to leave, or you can do what’s possible for you to do; to make life better for the people that you serve.” -Dr. Lester L. Carter, Jr. Those wanting to make a community contribution in honor of Dr. Carter’s life can direct their support to COA Youth & Family Centers. 909 E Garfield Ave, Milwaukee, WI 53212

The family of Dr. Lester L. Carter Jr. created this Life Tributes page to make it easy to share your memories.

Send flowers to the Carter family.