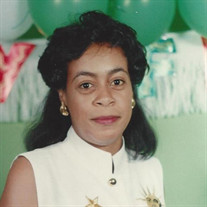 The earth is the Lord's, and the fulness thereof, the world, and they that dwell therein. - Psalm 24: 1 Lucretia Ann Barnes better known as "Lue" by those whom loved her dearly, a free hearted sister, aunt and friend. A Godly life ended when Lucretia Ann Barnes was taken from us. We know she is at rest with our Heavenly Father after suffering for quite awhile. The Lord took her from all her pain and took her to Himself, where there is no pain, no burden, or a tear. Lucretia was born on April 20, 1958, to the loving parents of Harris Watson and Bertha Barnes in Doloroso. Mississippi. She was a graduate of Wilkinson County High School in Woodville, MS (May 1976). She also attended Alcorn State University in Lorman, MS for a number of years. Lucretia accepted Christ as her Lord and Savior on September 6, 1970, at Free Spring Baptist Church in Doloroso. MS. Later, she relocated to Milwaukee, uniting with Greater Galilee Baptist Church where she continued working for the Lord becoming a devoted member where she served faithfully until her death. Before retirement, she worked for the U.S. Department of Housing and Urban Development. During her employment at HUD, she became a proud member of the National Organization Blacks In Government (BIG). Lucretia loved the Lord and her family. She enjoyed reading her bible, meeting new people, and traveling. Her most favorite past time was spending time talking on the phone to her loved ones especially to her siblings, nieces/nephews, and friends. She was a compassionate' and extremely generous person. If she had $1.00 in her pocket, you had $.50. That was her way showing love. Her nieces and nephews would often say she was the aunt with the "big bark" and no bite. Lucretia departed this life on July 24, 2021 . She was preceded in death by her loving parents Harris Watson and Bertha Barnes; two brothers Roosevelt and Will Arthur Barnes; five sisters Gertie Mae Payne, Annie Lee Cross, Juanita Cooper, Rose Marie Woods and Berline Ewing; two nephews Demetrius Barnes and Gregory Cooper and four nieces Jacqueline Ward-August, Curita Barnes, Tonya Kindard and Jennifer Harris; and four brother in laws Steve Cross, Leroy Woods, Jeffeerson Whittley, and Willard Cooper She leaves to cherish her memory: sisters, Valeria (Lionell) Harris of Woodville, MS, Alberta Ward of New Orleans, LA lona Whittley, Dora Barnes, and Liza Cross all of Milwaukee, WI; two brothers, Samuel (Dorothy) Barnes and Willie James (Betty) Barnes all of Milwaukee, WI; sister-in-law, Dorothy Barnes of Fresno, TX; two brothers-in-law, James Roger Ewing and Michael Payne, Sr. of Milwaukee, WI; and a host of nieces, nephews, relatives, and friends.

The earth is the Lord's, and the fulness thereof, the world, and they that dwell therein. - Psalm 24: 1 Lucretia Ann Barnes better known as "Lue" by those whom loved her dearly, a free hearted sister, aunt and friend. A Godly life ended when... View Obituary & Service Information

The family of Mrs. Lucretia Ann Barnes created this Life Tributes page to make it easy to share your memories.

Send flowers to the Barnes family.