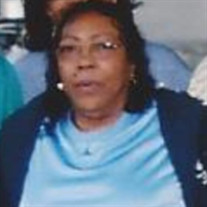 Lynda Lee Colbert was born on April 15, 1943 to the union of John Authur Earl, Sr and Louise Gladys Earl in Slidell, Louisiana. Lynda received her formal education at St. Tammany High School in Slidell, Louisiana. She furthered her education at OIC for Mechanical Drafting and at ISA for Cosmetology. She accepted Christ in February 1983. She was self-employed at Lynda's Home Away From Home Childcare Center as a Childcare provider for over twenty years. In her leisure, she enjoyed "going to work at the Pot", her family in whole and spent quality time with all of us. She loved to cook and watch Cheaters and Jerry Springer. She loved watching boxing and Sunday football with her son and grandsons! Far more above all else, for many years when Mommy opened her eyes, she committed to the reading of God's Holy Word daily and in the latter months, she marvelled in her gospel music with praises to our Most High God. She was a member at Greater Mt. Sinai and was an advent tither. Lynda Lee Colbert departed this life on January 26, 2022. She was preceded in death by her father, John Earl, her mother Louise Williams, brothers John and Rogers Earl, her sister Gertie Sylvas, and sister Evella Nelson. She leaves to cherish her memory: Daughters Danita Y. Davis (Deon), Deona M. Williams (Willie), Dawnette C. Cloyd and her son DeShaun D. McKinleY,Sr. (Tamekia). Fifteen Grandchildren: Maria, Derrick, Trenton "Peanut", Deon, Jessica, Jonathan, Jasmyne, Jontae', DeMarco, Deona, Danielle, Makayla, Alyssia, Aniah, and DeShaun, Jr. Six Great-grandchildren: Kameren,Trenton, Jr. , Triston, Kayden, Madison, and Ramir. As well as a host of nieces, nephews, and friends.

The family of Mrs. Lynda Lee Colbert created this Life Tributes page to make it easy to share your memories.

Send flowers to the Colbert family.