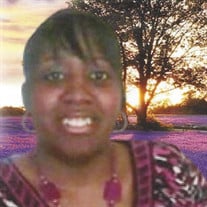 Macshaunya S. Wright was born October 12, 1978, to parents, Sherry Singleton and Mac Rogers of Milwaukee Wisconsin. Macshaunya received her formal education from Greendale School district and later graduated from Pulaski High School of Milwaukee in 1998, enlisting in the US Army shortly after. Upon her return, she studied Human Services at Upper Iowa University. Mrs. Wright prided herself of being the best. She was motivated for greatness. Very outspoken, strong minded, and loved to meditate. She also enjoyed quality time with family, good music and reading her Bible. She served under the leadership of Pastor Jerry Reaves Sr.. of Milwaukee Pentecostal Outreach Ministries for several years. The duration of her career was spent at St. Mary's Hospital of Milwaukee, WI where she assisted the community with healthcare resources and billing inquiries. She established her license as a foster parent and later moved on to continue her career at MCFI, assisting families in need of Home Healthcare. On January 3,2013, she married her husband Tosin Mark Agbanah, and they were blessed with 2 beautiful children, T. Wilson, and Sabrina Faulk. Together, they created a business that would cater to her continuation of assisting the community with what they needed to sustain their livelihood. On October 1, 2021 r Macshaunya was called home to be with the Lord. She will truly be missed by all whom lives she touched. Macshaunya was preceded in death by her stepfather, Jessie Singleton; three brothers, Gary Wright, Justin Singleton, and Antonio Singleton; and grandmothers, Ruby White and Earlene Rogers. She leaves to cherish her precious memories: beloved husband, Tobin Mark Agbanah; their 2 children, T. Wilson and Sabrina Faulk; parents, Sherry Singleton and Mac Rogers; brothers and sisters, Sherry (Lawrence) Wright, Brandy Wright, Toshina (Marques) Wright, Thomas Walker, Tiffany Walker, Jessica Singleton, Ty Green, Jai Green, Jarrod Singleton, MacShel1 Davis, JaKaris Davis, Darnelia Brown, and Terrance (Roxanne) Singleton; and a host of aunts, uncles, nieces, nephews, cousins, and supportive friends.

The family of Mrs. Macshaunya Wright created this Life Tributes page to make it easy to share your memories.