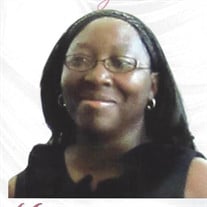 Margaret was born September 13, 1960 in Milwaukee Wisconsin to Hattie Mae Hunt and AC. Watts, the last of three girls. She professed Christ as a child, was baptized, and lived her life according to the gospel. She attended Siefert Elementary; John Muir Middle; and graduated from Custer High School (now Barack Obama School of Career and Technical Education) in 1978. Margaret received an Associate Degree in Childcare and Development and also pursued a Bachelor's Degree in Early Childhood Development at UW-Milwaukee. Margaret believed in and was an advocate for public education. Her first educational position was with Urban Day School. She later accepted a position with the Milwaukee Public School System (MPS) as a Para Professional and Parent Coordinator retiring after 20 years of service. Margaret's past times included cooking, gardening, and working on home design and maintenance projects. She loved family and facilitated many holiday gatherings where she solicited the help of the younger generations in food preparation, her way of passing down recipes that began with her mother. Margaret had the heart and spirit of a caregiver as she cared deeply for the family's wellbeing including taking on the role of primary caregiver for her mother so that she could remain in her home until death. She was patient and always provided guidance and support to assist family and friends who sought her out for her wisdom. As unexpected as her passing was, both her sons had the opportunity to say goodbye. She listened to Cameron's voice as he poured his heart out to pay tribute to all she had done for him, and to tell her how much he loved and appreciated her. Margaret's heart "skipped" a beat at the sound of her oldest child's voice by her bedside. She opened her eyes to acknowledge Terrence's presence as he said his final good-bye. Minutes later, Margaret took her last breath, satisfied in hearing her children's voices and knowing that their love for her would be forever in their hearts. Margaret was preceded in death by her parents, Hattie Mae Hunt and AC. (Corine) Watts; and sister, Rosie Mae Hunt. Margaret leaves reflective. heartwarming, and at times humorous memories to be cherished by her sons, Terrence (Dia) BattleHunt and Cameron Hunt along with her granddaughter, Zoe; sister, Carolyn B Hunt (Milwaukee, WI); a nephew; nieces; great nephews; great nieces; cousins; and a host of other relatives and friends. In her final act of selfless service to others, Margaret was an organ/tissue donor. "Well done thy good and faithful servant"

Margaret was born September 13, 1960 in Milwaukee Wisconsin to Hattie Mae Hunt and AC. Watts, the last of three girls. She professed Christ as a child, was baptized, and lived her life according to the gospel. She attended Siefert Elementary;... View Obituary & Service Information

Margaret was born September 13, 1960 in Milwaukee Wisconsin to...

Send flowers to the Hunt family.