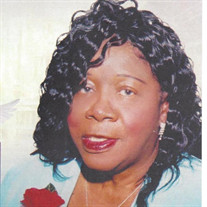 Margaret Jordan Smith was born August 17, 1933 to the union of Cleve and Willie Mae Jordan in Memphis, TN. Margaret received her formal education at Booker T. Washington High school in Memphis, TN with honors. Margaret accepted Christ as her Savior at the early age of 15 and was united with Matthews Baptist Church where she served as a choir member. After moving to Milwaukee, Margaret was a devoted member of Tabernacle Community Baptist Church. Margaret was united in holy matrimony with Kernetchen Smith in 1957. They got married in Memphis, TN and their union was blessed with six children. As time went past, Margaret relocated her family from Memphis, TN to Milwaukee, WI in 1974 where she then met the love of her life and fishing buddy; Eula C. Gaddis. Margaret affectionately called "Mama Dear" was a Homemaker and helped raise her siblings along with others that needed her. In her leisure time, she enjoyed spending time with family, traveling, dancing, cooking and visiting the casino. She also loved to watch movies that involved dancing and playing cards. She was always full of jokes, sarcasm and laughter. Her facial expressions and middle finger dominated most conversations she had. Margaret Jordan Smith departed this life on January 16, 2022. She was preceded in death by her parents; Cleve and Willie Mae Jordan, Sister; Ruby Gilmore, Brothers; Lloyd Jordan, Henry Gilmore and John Wesley Jordan, and the love of her life; Eula C Gaddis. She leaves to cherish her memory her sister; Barbara Jordan Foster of Memphis, TN, her children; Pamela (Lawrence) of Pine Bluff, Arkansas, Ronald, Debbie (Dave), Nadalyn, Cornelius (deceased), Henry, Terry Lee and Marvin all of Milwaukee, WI and an honorary daughter; Jan Weeden of Chicago, Ill, 14 grandchildren, 37 great-grandchildren and 28 great-great-grandchildren, 2 nieces, nephews and a host of great nieces and nephews of Memphis Tn.

The family of Mrs. Margaret J. Smith created this Life Tributes page to make it easy to share your memories.