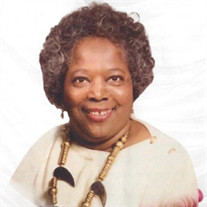 Marie Hunter was born September 28, 1926, to the union of James Howell and Retta Hill in St. Louis, Missouri. She received her formal education at Dashon High School. After high school, she gained employment with Cook County Hospital, where... View Obituary & Service Information

The family of Mrs. Marie Hunter created this Life Tributes page to make it easy to share your memories.

Send flowers to the Hunter family.