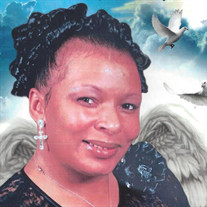 Marilyn Winters Rodgers affectionately known as Murk was a beautiful baby girl born on May 4,1958 in Milwaukee, Wisconsin to the proud and Emmett Wade Winters and Velma Kern. Marilyn accepted Christ as her Lord and Savior at an early age and never lost her faith, she was united with family at Church of God in Christ. As an adult Marilyn rededicated her life to Christ and was united at Center Hill Missionary Baptist Church where she served as a deaconess. Marilyn was a good student who excelled in her academics, she received her formal education attending the Milwaukee Public School System. She attended Robert Fulton and was the Captain of the Drill Team in 1969. She graduated from Lincoln High School with the Class of 1975. She was united in holy matrimony with Joseph Rodgers on November 18, 2007 in Conway, Mississippi, their union was joined with many children. In her leisure she enjoyed spending quality time with her children, grandchildren whom she adored and her friends. Marilyn loved people, she was the type of woman who wanted to see everyone happy. She was the life of the party always enjoying social gatherings and attending important events. She enjoyed listening to music, cleaning, cooking, shopping and traveling but most importantly she loved to dress and coordinate her outfits. She was a giving woman with nurturing hands and her heart was full of compassion and unconditional love. Marilyn was a little woman in statue but large in life and if she had something to say she would say it. If she didn't like you, you knew it. Marilyn was a hard working woman employed by Tyson Foods up until she retired in 2019. Marilyn was much more than an amazing mother, nurturing grandmother, loving sister, favorite aunt, lovable cousin and good friend, she was a blessing to all! Marilyn Lavern Winters-Rodgers was loved she will be dearly missed she departed this life on October 19, 2021. She was preceded in death by husband; Joseph Rodgers; parents, Emmett Wade Winters and Velma Kern; sisters, Sharon and Lenice Burt, grandson; Tevin Beanland and nephew; Dmitris Winters. Marilyn leaves to cherish her loving memory her sons; Corey Deon Winters of Dallas.Texas and Lathon, daughter; Markwida Winters Alexander of Brandon, Mississippi, grandchildren; Shamaria Walton of Houston, Texas, Demarte Winters of Brandon, Mississippi, Shatarius, Nikya, Corey Jr., ZaCori and Skylar Winters all of Milwaukee, Wisconsin and Legend and Creed Winters of Dallas, Texas and six great grandchildren and her only niece; Diawanaqua (Nikita) Brown of Gary, Indiana along with a host of family members and dear friends.

Marilyn Winters Rodgers affectionately known as Murk was a beautiful baby girl born on May 4,1958 in Milwaukee, Wisconsin to the proud and Emmett Wade Winters and Velma Kern. Marilyn accepted Christ as her Lord and Savior at an early age... View Obituary & Service Information

The family of Ms. Marilyn Winters Rodgers created this Life Tributes page to make it easy to share your memories.

Marilyn Winters Rodgers affectionately known as Murk was a beautiful...

Send flowers to the Rodgers family.