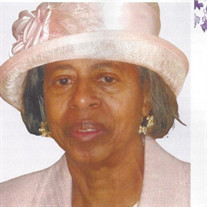 Marva James-Williams was born to the union of Jesse and Alice (Jackson) James on March 12, 1937, in Festus, Missouri, and moved to Milwaukee, Wisconsin, as a young adult. Marva began her formal education at Douglas High School, Festus, Missouri, and completed her general education at Milwaukee Area Technical College (MATC). Marva, determined to better prepare herself, continued at MATC earning an associate degree in general education. She later enrolled and earned an associate degree as a Dietary Technician from Cardinal Stritch University, Milwaukee. She committed her life to Christ in the early 1970's uniting in fellowship with Shiloh Tabernacle, Milwaukee, WI. While at Shiloh, Marva served as a member of the choir, usher board, missionary department, cook and kitchen helper, president and member of the nurse aides and mother's board. She remained active at Shiloh until her health would no longer permit. The Joy of The Lord Was Truly Her Strength! Marva united in marriage with the late Alan C. Williams, and they created a family that includes 3 daughters and 1 son: Wanda, Faye, Teri and Dale. Over the years, Marva helped support her family serving in different positions: industrial sewing, housekeeping, cook, health aide/care giver, and (MPS) summer camp assistant. She proudly became a Milwaukee Public School (MPS) Paraprofessional working several years at Washington High School and Assata. She retired in 2005. Marva enjoyed arts and crafts, crocheting, and writing poetry. But it was the baking of delicious rolls that melted in your mouth, that famous pound cake, and cakes and pies that kept her busy after retirement. She loved It! Marva James-Williams departed this life on August 3,2021, in Milwaukee, Wisconsin. She was preceded in death by her husband, Alan C. Williams; twin grandsons, Tyran and Tyron; six brothers, Earl James, Ronnie James, Charles James, Jesse James, Jr., Gene James, Sr., and Cecil James; and three sisters, Patricia Patton, Mary Smith, and Sandy Oliver. Marva is survived by her four children, Wanda (Earl), Faye, Teri, and Dale; a host of grandchildren and great grandchildren; four sisters, Thelma Taylor, Faye Manning, Janet Cherry, and Madelyn Swiney; and a host of nieces and nephews. The companionship of her sweet and loving spirit will be missed. Her life touched many. She will be greatly missed and forever loved.

Marva James-Williams was born to the union of Jesse and Alice (Jackson) James on March 12, 1937, in Festus, Missouri, and moved to Milwaukee, Wisconsin, as a young adult. Marva began her formal education at Douglas High School, Festus,... View Obituary & Service Information

The family of Mrs. Marva E. James Williams created this Life Tributes page to make it easy to share your memories.

Marva James-Williams was born to the union of Jesse and Alice...