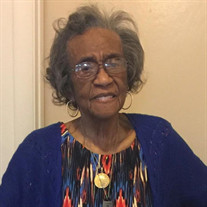 On Thursday, April 19, 1934 in Junction City, Arkansas inside the home of Matthew and Mattie (Mosley) Davis, there was a beautiful glow in the air. Smiles were on faces with an over joy of love when their eighth and final child made that grand entrance. The baby was a healthy beautiful girl that her parents named Mattie Mae. Mattie’s father worked in the fields and her mom attended to the house and children. As a baby, all of Mattie’s awaken time was spent in the presence of her mom. As a walking toddler, she was an affectionally clingy baby to her mother. While just under three years old, her mother unexpectedly passed away. By the Grace of God, a devoted father and loving older brothers they were able to calm her down by smothering her with so much love and affection - one could say she became cherished. A couple of years later, her father met and married Ms. Hattie Taylor, who had showered Mattie Mae with the motherly loved that she so desired. Mattie was advanced in her learning and began school early with two of her older siblings. She received her primary & high school education at Rosenwald School in Junction City, Arkansas where she graduated in 1952. At an early age Mattie’s parents expressed the importance of putting God first in their lives. She accepted her faith and joined Mt. Pigeon Baptist Church of Arkansas. In 1955, Mattie met and married the love of her life, Mr. Jay Lee Dirden. Looking to provide a better life for themselves and their two children, they moved from El Dorado, Arkansas and settled in Milwaukee, Wisconsin where they had six additional children. Soon thereafter, Mattie entered the workplace due to her husband’s declining health and the need to care for their eight children who they loved so dearly. Mattie was an active mother and devoted wife while being a dedicated worker. Her final place of employment was at General Electric in the Engineering Dept where she retired in 1997 after twenty years of service. While working there she extended her education at Waukesha County Technical College receiving several certifications. God blessed Mattie to join United Christian Church of Milwaukee, WI in 1980 under the pastoral leadership of Pastor Eloyd Jones where she served in various capacities which she counted all joy. She was a pillar within the church, leading various auxiliaries. Mattie was a part of the Usher Board, a Sunday School Teacher, Woman’s Day Coordinator, and Ministerial Board President, just to name a few. In 2000 Mattie accepted her call from God and was ordained as an evangelist. Mattie’s greatest passion was the Food Ministry where she served nearly twenty years after retirement, preparing several thousand meals for her church and the surrounding community between being a mother, grandmother, and great grandmother. Mattie departed this life on March 29, 2021 and was preceded in death by her husband Jay Lee Dirden, a son Jay Anthony Dirden, her parents Matthew & Mattie Davis, her mother in love Mrs. Hattie Davis, six brothers the Davis men Clarence, Vassie, Elisha, Marshall, LW and LC. One beloved sister Cora M. Taylor, and daughter-in-law Karen Dirden Evg. Mattie Mae (Davis) Dirden leaves to cherish her precious memory seven loving children: Mattie (Otha) Freeman, James Dirden, Veronica (Willie) Cole, Bonita Perry, Jarvis Dirden, Jerald (Crystal) Dirden and Judy Phillips. Fifteen grandchildren, twenty-two great-grandchildren, and two great-great grandchildren. One Sis-n-law Lucille Smith and one Bro-n-law Donnie Taylor. A host of nieces, nephews, cousins, and friends.

On Thursday, April 19, 1934 in Junction City, Arkansas inside the home of Matthew and Mattie (Mosley) Davis, there was a beautiful glow in the air. Smiles were on faces with an over joy of love when their eighth and final child made that grand... View Obituary & Service Information

The family of Ms. Mattie Dirden created this Life Tributes page to make it easy to share your memories.

Send flowers to the Dirden family.