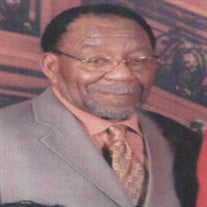 MEL VIN'S JOURNEY Melvin O'Neal Fenceroy was the second-born son of Willie and Virginia Fenceroy on December 5, 1945. On the crisp Spring morning of March 31, 2021, he put his hand in the Master's Hand and followed Him to his eternal home on high. it was Holy Week, oh what a time to arrive at the Gates! Melvin joined his beloved wife Emma, his Parents, Grandparents, Brothers (Charles, Larry, and Raymond), and Nephew (Montreal) amid Heaven's celebration of Passover. We can only imagine his excitement to witness the redemption celebration of Jesus' crucifixion; we are sure he is talking their ears off in pure wonder. Melvin's Earthly journey began in the winter of 1945 in Collinston, LA. Growing up he earned the nickname "Neck" which followed him throughout his life. At an early age, he accepted Christ and was baptized at the New Star Missionary Baptist Church. Melvin received his early education at Collinston Central Elementary and Union High School, graduating in 1963. "Neck" played in the local intramural basketball leagues and played baseball during his freshman and sophomore years in high school. Melvin loved Union High, the friendships a d memories were near and dear to his heart. He traveled back as often as he could to stroll down memory lane at he High School reunion. Melvin attended Grambling State University for one year before following his older brother Charles to Milwaukee, WI for better opportunities. Soon after arriving in Milwaukee, he met and married the lovely Emma Jean Colbert on August 11, 1965. He worked at Baker's Shoe store and A O Smith, before being drafted into the US Army in October 1966. Melvin earned his Honorable discharge as an E4 Executive Chef in September 1968. After returning from the Military, he worked at Briggs & Stratton; he went on to work at the U.S. Postal service for 10 years and Milwaukee Transit where he retired in May 2001. His passion for cooking and serving others never went away, he worked part-time for Jake's Catering Company for many years. Melvin enjoyed spending with the elderly, so in his post-retirement years, he worked at St. Luke's hospital and was a driver for St. Luke's hospital and was a driver for Lutheran Home & Hardwood Place Senior Care Communities. Melvin redirected his life to Christ when he joined the Smyrna Church of God in 2002, under the leadership of Pastor LeRoy Davis. He was a faithful servant to the Lord, Often helping with the Church's transportation needs; he coked delicious spaghetti for the district's annual cook out as well as serving on the usher board for both the jurisdiction and the local (Smyrna) church. Melvin's service to the Kingsom earned him the Man of Distinction Award from the jurisdiction. Before his health began to decline, he enjoyed playing golf and barbecuing for hi friends. Over the last few years, Melvin would spend his days at the church or visiting with friends. During these outings, he would stop by McDonald's to purchase himself a coffee and three chocolate chip cookies. His family did not realize how much he loved his treat until he was no longer able to drive. He would remind his children and grandchildren daily to pick up his special order; his family tried buying him packs of chocolate chip cookies and McDonald's brand coffee grinds, but that would not do, it had to come from the restaurant. Memories of Melvin will be forever cherished by his dutiful children: Felicia Fenceroy Robinson (Milwaukee, Wi) and son Michael Fenceroy (Ft. Meyers, FL); grandchildren: Dairon, Tyehimba, Jasmine, and Jabari (Milwaukee, WI), Bryanna and Ciara (Land 0 Lakes, FL); great-grandchildren: Adriana, Kyleigh, Ava, Princeton, and Parker. His siblings Brenda "Bren girl" Loche (Dean) of Bastrop, LA, Rodney Fenceroy (Brenda) of Collinston, LA, and Gregory Fenceroy (Edna) of Fargo, ND. Sisters-in-Love, Gladys Chatman, Lorene Brown, Willa Colbert all of Tulsa, OK, and Debra Fenceroy of Milwaukee, WI. One Aunt/2nd Mom Bessie Brown of Milwaukee, WI. First cousins/Sister, Sherry Suggs of Las Vegas, NV. A bonus son, Antonio Robinson, and God-daughter Willette Sims of Milwaukee, WI. Many nieces, nephews, cousins, other relatives and friends.

MEL VIN'S JOURNEY Melvin O'Neal Fenceroy was the second-born son of Willie and Virginia Fenceroy on December 5, 1945. On the crisp Spring morning of March 31, 2021, he put his hand in the Master's Hand and followed Him to his eternal home on... View Obituary & Service Information

Send flowers to the Fenceroy family.