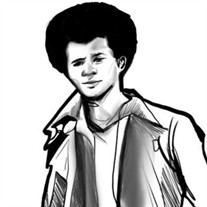 Michael Eugene Herndon was born on August 6, 1953 to the union of Leonard L. Herndon Senior and Virginia L. (Kennard) Herndon in Chicago Illinois. He was the third of nine children born to this union. He was raised in Milwaukee, Wisconsin in a loving family. Michael received his formal education in the Milwaukee Public school system graduating from Milwaukee Boys Trade and Technical High School. He further his education by obtaining a Bachelors degree in English from Concordia University in Mequon, Wisconsin and a Masters of Science degree in Psychology from The University of Wisconsin Madison in Madison, Wisconsin. Michael accepted Christ at an early age and was baptized and united with Tabernacle Missionary Baptist Church. He most recently was a member of Community Missionary Baptist Church of greater Milwaukee. He was employed by broadstep Behavior Health and Supportive Living as a residential counselor from 2007 until the time of his death in Milwaukee. He was also employed by Bell Therapy from 1999 until broadstep purchased them in 2007. In his spare time Michael enjoyed reading and watching science fiction movies, playing video games, watching, discussing and analyzing both college and professional basketball and football games, reading comic books and novels. Michael was a lifelong learner and valued education. He also enjoyed walking and riding his bicycle and playing pickup basketball games. Michael was a role model and a mentor to his family and others. Michael Eugene Herndon departed this life on April 6, 2022. He was preceded in death by his father Leonard L. Herndon Sr., his mother Virginia Herndon brothers Leonard L. Herndon Jr. and Carl D. Herndon. He was also preceded in death by his paternal grandparents and his maternal grandparents Michael leaves to cherish his memory his sisters Sharon Elizabeth Herndon Dye of Orlando, Florida, Donna Faye Herndon, of New Hope, Minnesota and Theresa Maxine Herndon of Milwaukee, Wisconsin. Brothers Lawrence Edward (Darlene) Herndon Sr., of Huntsville, Alabama, Anthony Marvin (Alexandra) Herndon Sr., of Wendlingen, Germany and Phillip Lee Herndon of Los Angeles California. One aunt, Donnealia Ransom of Milwaukee Wisconsin. He also leaves to cherish his memory a host of niece’s nephew’s great nieces and great nephews and cousins and friends.

Michael Eugene Herndon was born on August 6, 1953 to the union of Leonard L. Herndon Senior and Virginia L. (Kennard) Herndon in Chicago Illinois. He was the third of nine children born to this union. He was raised in Milwaukee, Wisconsin in... View Obituary & Service Information

The family of Mr. Michael Eugene Herndon created this Life Tributes page to make it easy to share your memories.

Send flowers to the Herndon family.