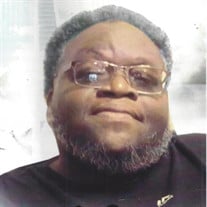 Michael Wesley Paige was born on April 23, 1971, to Mae Evelyn Paige and John W . Jones in Milwaukee, Wisconsin. He was lovingly called "Big Mike" by family and friends. To know him was to love him. He was well known for his laid-back personality, cool demeanor and easy conversations and advice. You could catch him at every family event, sitting at the card table, playing dominoes, gambling, talking plenty of smack, and giving everybody a good laugh. If you couldn't find him, you didn't have to look too far, because he was usually at "The Pot" where he loved to spend time with family and friends as well. He had a natural GPS system and could navigate his way anywhere. This came from his many jobs in the transportation field. Rather he was driving the school bus, or dispatching for various companies, he always found his natural abilities in transportation and recently looked forward to helping his sisters with their new transportation business venture. He loved what he did at his job of many years at Always Towing and Recovery. Of all the things Mike accomplished in his life, he was most proud of the birth of his daughter Zaneiya. He would come to appreciate that she was the one thing in his life that he could pour all his love into unconditionally and she would make him proud in return by showing him all the strength that she had with the obstacles that she would overcome and how they shared that together. Their bond was undeniable. Mike received his formal education at Beautiful Savior Lutheran School and Graduated from Wisconsin Lutheran High School in 1990. It is at these schools he would meet and develop a lifelong friendship with his best friend Ms. Carey Wilson. Mike departed this life on New Year's Day in his home with family by his side just like he lived his life. He was preceded in death by both his parents; Mae Evelyn Paige and John W. Jones, Grandparents; Lorine Paige and Henry Paige, Aunts; Irma Jean Paige and Margaret Paige, Uncles; Ernest Paige and Cornelius Paige, Sister; Arana Paige, Brothers; Terry and Jerry Jones, Larry Jones, Close Cousin; Corey Turner. He leaves to cherish his many memories; his daughter, Zaneiya Paige, brother; Marlon (Lola) Paige, Sisters; Kayla Jones and Talayla Jones, Nephew; Christian D. Danson, Niece; Ta'Liyah R. Jones, Aunts; Vergie Mae Paige, Irene Grant, Bertha Story, Clara Lucas Uncles; William Paige, Otis Paige Sr., Charles Paige, James Paige, Goddaughter; Carrington Wilson, honorary children; Alfonzo Thomas Jr., Niajah Walker, Damarion Tatum, a host of family, friends, and co-workers.

Michael Wesley Paige was born on April 23, 1971, to Mae Evelyn Paige and John W . Jones in Milwaukee, Wisconsin. He was lovingly called "Big Mike" by family and friends. To know him was to love him. He was well known for his laid-back personality,... View Obituary & Service Information

The family of Mr. Michael Wesley Paige created this Life Tributes page to make it easy to share your memories.

Send flowers to the Paige family.