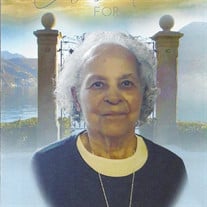 Mrs. Millie Almond Fudge Rookard departed this life on Sunday, August 15, 2021 . God blessed her to be with us for 95 years. Millie was born July 24, 1926, in Dooly County, Byromville, Georgia to the union of Samuel Fudge and Mary Tinsley. Millie was one of five children born to this union, one brother and three sisters, all of whom are deceased. Millie received her formal education in the Dooly County School System in Vienna, Georgia, where she attended Drayton School. Millie accepted Christ at an early age and was a member of the Pleasant Hill Baptist Church in Dooly County, after moving to Milwaukee in 1948, she joined Greater Galilee Baptist Church under the Pasturage of Rev. Brumfield. Later after moving to the far north side of Milwaukee, she joined St. Mark Evangelical & Reform Church. At St. Mark, she sang in the choir and taught Sunday school for several years. Then in 1967, she moved closer and once again reunited with Greater Galilee Family under Rev. E.B. Phillips. Millie participated in several ministries at the church. She served in the Prayer band, the Century Club (Senior's ministry) attended Sunday School and worked in the kitchen to feed the hungry. She also assisted with meals for funerals until her health began to fail. She often talked about the ;oy and blessings she received in giving back to her church and the community. Pastor White appointed Millie to the Mother's Board at Greater Galilee; she felt this was truly a gift from God and one of her greatest rewards; she was a faithful and aedicated member until her passing. In 1943, Millie was united in holy matrimony to Henry Cole Barnes and to this union two daughters were born: Dorothy & Bettie. In 1968, Millie was united in marriaqe to Grover C. Rookard Sr., and to this union one son was born, Grover Jr. Millie was a loving and devoted wife to Henry and to Grover. After Grover became in 2004, she was by his side and cared for him during his illness until God called him home in 2005. Millie was always a diligent worker and after moving to Milwaukee in 1948, she worked several jobs until 1963 when Millie began her career at St. Joseph Hospital. She worked at Sf, Joseph as a Unit Secretary for 25 years and she was blessed to retire in 1988. One of Millie greatest joys was spending time with her family especially during family outing's and reunions, she was an avid reader of novels and she loved reading her daily scriptures. Millie was continually active in Gilda's support group and loved spending time with her friends. Millie loved to travel and would always anticipate going to visit her relatives regardless of where they lived. At 85 years young, she took the opportunity to travel by train to Seattle, WA., she took the trip alone and loved it. Millie was the "Matriarch" of our family and a "role model" for her children, grandchildren; great-grandchildren, nieces, nephews, great nieces, and nephews. Millie was preceded in death by her parents, Samuel, and Mary; four siblings, Major, Sally, Georgian, and Hazel; both husbands, Henry Barnes, and Grover C. Rookord. Sr.; beloved son, Grover C. Rookard, Jr. and beloved granddaughter Baina Rookard. Millie leaves to cherish her memory: two daughters: Dorothy L. Barnes- Miller and Bettie J. Barnes Martin Cottage Grove, MN; seven granddaughters: Joscelyn Barnes, St. Paul Park, MN, Jacquelyn Barnes Landry, Cottage Grove, MN, Jessica Jeremy) Powers, Becca Fahler, Stormie Loren Milwaukee, Melissa Rookard, Kentucky, and Dawn Miller. Dallas, TX; two grandsons: Devin Miller, Cedar Hill, TX, and Timothy Loren, Milwaukee, WI; thirteen great-grandchildren: Amajenae, Elijah, Ajsheri, Dorian, Donovan, lie. Lyndsey, Sean, Madison, Cameron, Emanuel, Eli and Nathan; and a very dear friend: Mrs. Velma Payne. She is further survived by a host of nieces, nephews, great-nieces and nephews, great-great nieces and nephews, cousins, other relatives, and friends.

Mrs. Millie Almond Fudge Rookard departed this life on Sunday, August 15, 2021 . God blessed her to be with us for 95 years. Millie was born July 24, 1926, in Dooly County, Byromville, Georgia to the union of Samuel Fudge and Mary Tinsley.... View Obituary & Service Information

The family of Ms. Millie Almond Rookard created this Life Tributes page to make it easy to share your memories.

Send flowers to the Rookard family.