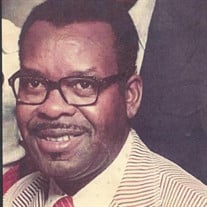 Milton Nathaniel White was born on April 15, 1929 to the late Milton & Elbertha White, Sr. in Arlington, TN. He departed this life on October 20,2021. Milton received his formal education at Barret's Chapel School in Arlington, TN and then furthered his education at Technical College in Milwaukee, WI. He was united in holy matrimony to Ever C. Brooks on January 7, 1949 in Baldwin, MI. They were married 30 years and to this union they were blessed with four children. Milton accepted Christ at an early age and was a faithful member of Hammond Grove Baptist Church where he served as a choir member. Milton honorably served in the United States Army from 1952 - 1955. He was also employed as a welder with A. O. Smith for forty years until retirerment. He enjoyed listening to gospel music and he would often visit different Churches to listen to various gospel groups. He was an avid sorts fan. He loved watching basketball, football and baseball. He especially loved the Milwaukee Bucks. Milton was a snappy dresser and he would be seen often sporting his signature fedora hat on special occasions. He was caring, kind-hearted and loved gathering with family and friends. He was a faithful member of the White Brothers & the Northern Wonders gospel group along with his brothers. Milton was preceded in death by his daughter, Shirley Ann White; his brothers Benjamin, Eldrige, Ernest, Erbert & Aubrey White; his sisters Annie & Ruth White. He leaves to cherish his memory: his wife of 30 years, Ever C. White, his sons Curtis (Maxine) and Anthony White; daughter Angela White; and children Kevin White, Ramel & Jemarr Parks, Charity, Jessica, Justin, Caleb, Arianna & Amari Balton; great-grandchildren Andreas, Londyn, Lizzie and a host of cousins, nieces, nephews, great-nieces and nephews and friends.

Milton Nathaniel White was born on April 15, 1929 to the late Milton & Elbertha White, Sr. in Arlington, TN. He departed this life on October 20,2021. Milton received his formal education at Barret's Chapel School in Arlington, TN and then... View Obituary & Service Information

The family of Mr. Milton Nathaniel White Jr. created this Life Tributes page to make it easy to share your memories.

Send flowers to the White family.