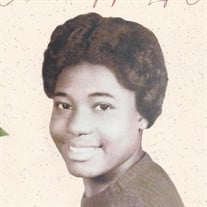 Myrtle Lee Reeves was born on October 20,1950. Myrtle accepted Christ at an early age and was baptized. She joined Mt. Carmel Baptist Church in Pittsburgh, Pennsylvania. She joined the Sunday School and became a member of the choir. After... View Obituary & Service Information

Send flowers to the Reeves family.