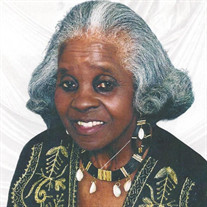 Mrs. Nather Lee Roby was born on May 27, 1930 to the late Mr. Loving and Mrs. Annie Graham in Louisville, Mississippi. Nather graduated from Noxapater High School and furthered her education at Alcorn University in Alcorn, MS. Nather accepted Christ as her Savior at an early age. She was united with Little Calvary Missionary Baptist Church in Louisville, MS, where she served as a faithful member until relocating to Milwaukee, WI. She then united with Pilgrim Rest Missionary Baptist Church where she served as a faithful member and on various committees until her health began to fail. She was also active in the community. On November 12, 1954, Nather was united in holy matrimony to Mr. Marion Roby, Jr. She was employed by Adelman Corporation for over 20 years and later became employed with Metro Home Health Service and was recognized for 15 year of dedicated service and commitment. Nather enjoyed spending time with family, gardening, walking, vacationing, baking (especially homemade cakes and pies, which everyone loved), reading, and studying her bible. She also enjoyed watching television. Nather peacefully departed this life of90 years on April 28, 2021 at 3:40 AM with her niece, Maxine and goddaughter, Anna by her bedside at Ascension Columbia St. Mary's Hospital. She was preceded in death by her parents, Mr. Loving and Mrs. Annie Graham; husband, Mr. Marion Roby, [r., and seven siblings, Early, Lloyd, Ivory, Annie, Alice, Emma, and Earl Dee. Nather wore many hats over her 90 years of life and she leaves to cherish her memory: a special devoted and dedicated niece, Maxine McCain of Milwaukee, WI, who cared for her until her passing; three stepchildren, Marion Jean Roby Patterson, Susan Diane (Larry) Bray of Milwaukee, WI, and Tony Baker of Los Angeles, CA; two sisters-in-law, Christine Graham and Shelia Graham of Louisville, MS; one brother- in-law, Willie Donald of Chicago, IL; one godson, Angely Lampley; and a host of nieces and nephews, great nieces and nephews, great-great nieces and nephews, other loving relatives, and special friends.

The family of Mrs. Nather Lee Roby created this Life Tributes page to make it easy to share your memories.

Send flowers to the Roby family.