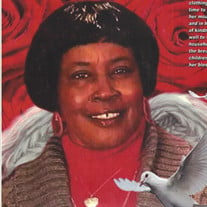 Norma L. Jordan was a beautiful baby girl born on July 26, 1947 in St. Louis, Missouri to her proud and loving mother, Clardie Mae Wallace She was a good student and fast learner who excelled in her academics. Norma received her formal education from the Oceola Public School System, graduating in 1966 from Harrison High School. While attending Progressive Missionary Baptist Church as a child under the leadership of Rev. L.B. Burton, Norma accepted Christ as her Lord and Savior and never lost her faith. As an adult, Norma was united with Holy Temple under the leadership of Rev. Nabors. Norma was united in holy matrimony with Ben Jordan in 1967 in Blytheville, Arkansas and their union was blessed with Four children. Norma was employed at Alexian Village as an Resident Assistance and Med Technician for over 20 years. She was a hard working woman who nurtured, gave unconditional love and exceptional care to all residents under her care. In her leisure, Norma enjoyed spending quality time with her children, grandchildren, family and friends. She also enjoyed traveling, vacating with her sister in St. Louis, listening to music, singing, decorating her house during the holidays, cooking, make her famous Giblet Gravy and dressing to impress. Norma could coordinate her clothes, jewelry and shoes to perfection. She was a lovable, classy woman with an illuminating spirit. She was kindhearted, joyful and strong willed. Norma was the glue that held her family together, and she defines the phrase "It takes a village to raise a child". Norma expressed love to all without no filter, to know her was definitely to love her. She was a gift from God, a woman of wisdom who had to ability to listen and give excellent advice. Norma was loved and she will be dearly missed. She entered into eternal rest on Saturday, March 5, 2022 a day that will be etched in her family hearts forever. She was preceded in death by her beloved mother, Clardie Mae Wallace; husband, Ben Jordan: three sisters, Bennie Brown, Diane Holmes and Bonita Wallace; stepbrother, David Wallace; granddaughter, Dymond Williams and three great grandchildren, Khamari, Bailee and Carnron. She leaves to cherish her fond memory her children, Latonda (Erbia) Tucker, Lynette (Bruce) Smith, LaTrice (Timothy Mills) and LaMar (Tenishia) Jordan; grandchildren, ReShay, Joseph, ReShod, Brittany, Mychal, Kenyon, DeArion, Shavez, Imani, Laneah, Lacaris, Caylib, Tamia, Maurtz Jr.; great grandchildren, Joseph IV, Naomi, ReShodJr., Khaeli, Ah'Moura, Ay'Vah, Shavez Jr., Za'Niyah and Prynce; sisters. Jaqueline Reeves, Carolyn (John) Harris and Brenda Wallace, brother, Larry Sturghill; stepsisters, Martha and Denise Wallace; special sisters, Linda Jones, Betty Blue,Omeisha Moore, Shirley Lee, Magarete Welford along with a host of nieces, nephews, bonus children, relatives and friends.

Norma L. Jordan was a beautiful baby girl born on July 26, 1947 in St. Louis, Missouri to her proud and loving mother, Clardie Mae Wallace She was a good student and fast learner who excelled in her academics. Norma received her formal education... View Obituary & Service Information

The family of Mrs. Norma Jordan created this Life Tributes page to make it easy to share your memories.

Send flowers to the Jordan family.