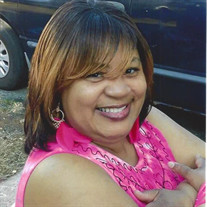 Nehemiah 8:10 "Do not grieve, for the joy of the Lord is your Strength" Patricia Williams was born on December 6, 1960 to the Union of Ella Mae Williams-Mables and Bernard Curby. Patricia Williams received her formal education at various elementary schools and attended DuSable High School in Chicago, IL. Patricia accepted Jesus Christ as her Savior at 20 yrs old and was united with The Word is God Worship Center where she served in many church positions one of the many was Hospitality . A Sisters Story- Trish as we called her, had a zest full of Life. She was outgoing,caring, and very youthful. When she became a Homemaker, she made it her Lifelong Journey and never looked back. Family Oriented was the pillar of her being. She was :full of smiles and laughter, her middle name could have been called Smiley. In her leisure time, she enjoyed going to church which was first and foremost. She Loved going Shopping which was her Go-to thing, having family time watching movies, and talking was a sport to her. No one could beat her in it. "You hear me Girl"? in her voice was a saying she always said. Patricia Williams departed this life on October 26,2021. She was preceded in death by Grandparents Jessie and Hazel Williams, Father Benard Curby, Brother Cyrus Williams and Hosts of Uncles,Aunts, and Cousins. She leaves to cherish her memory Mother Ella Mables, Sons Brian Williams, Geno Williams, and Demetrius Williams, Daughters Unique Williams, Sharon Jones,Sherry Jones, Son In Law Kelvin Hines, Sisters Teresa Brandon,Juanita Williams and Jewel Williams, Lolita Wiley, Brothers, Keith Williams and Leonard Williams 14 Grandchildren, 1 Great Grandson, and a host of Nieces, Nephews, Uncles, Aunts, Cousins and Friends.

Nehemiah 8:10 "Do not grieve, for the joy of the Lord is your Strength" Patricia Williams was born on December 6, 1960 to the Union of Ella Mae Williams-Mables and Bernard Curby. Patricia Williams received her formal education at various... View Obituary & Service Information

The family of Ms. Patricia Williams created this Life Tributes page to make it easy to share your memories.