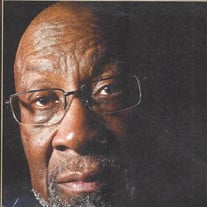 Peter Adams was born on March 27, 1933, to the union of Bertha and Willie Adams in Lexington, Mississippi. He was the oldest of 8 children. On February 21, 1959, Peter was united in holy matrimony with JoElla Saulsberry. Their union was blessed with two children: Andrea Michelle and Cedric Delandis. Peter accepted Christ as his personal Savior at an early age at Poplar Springs Baptist Church in Lexington, Mississippi. After moving to Milwaukee, Wisconsin, he united with Tabernacle Community Baptist Church, under the pastorate of the late Rev. Jewel Lawrence Williams, and recommitted his love and joy of Christ as his Savior under the leadership of Rev. Dr. Donna M. Childs. Peter was blessed to receive his formal education and graduated from Geeter High School in Memphis, Tennessee. He furthered his education at Milwaukee Area Technical College in Milwaukee, Wisconsin and Gateway Technical College in Kenosha, Wisconsin. Peter was employed as a machinist by American Motor Company, which was later purchased by Chrysler Corporation in Kenosha, Wisconsin. He remained with Chrysler Corporation and traveled daily to Kenosha. He worked a total of 33 years. Peter also was a taxi owner for over 40 years. Peter enjoyed traveling to old and new places. He particularly loved his European travels with his family. Yearly, Peter looked forward to going to the auto shows in Milwaukee and Chicago. His delight was in tinkering with anything that had parts he could breakdown and reconstruct. He also prided himself on knowing birthdays of family and friends. Peter loved to share a meal, tell stories, and weave in a joke or two. The Lord called Peter home on March 6, 2022. He was preceded in death by his parents, Bertha and Willie Adams; sisters; Annie Bell, Mamie Ward, Dessiere Martin; and brother, Howard Adams. He leaves to cherish her memory wife, JoElla; daughters, Sadarria Levett Stott and Andrea Michelle (Rickey) Scott; son, Cedric Delandis Adams; two brothers, Cleotha Adams and Booker T. Adams; one sister, Sarah Kelly; one sister-in-law, Katie Jones; one brother-in-law, Bobby Bell; three grandchildren, Zoye Nicole Scott, Quinntel LeRoy Bracyadams, and Alvin LeRoyce Bracyadams; two great grandchildren; god-child, Rev. Peter Joe Spann; and a multitude of nieces, nephews, cousins, and other family. Peter lived life to the fullest and the Lord blessed him!

Peter Adams was born on March 27, 1933, to the union of Bertha and Willie Adams in Lexington, Mississippi. He was the oldest of 8 children. On February 21, 1959, Peter was united in holy matrimony with JoElla Saulsberry. Their union was blessed... View Obituary & Service Information

The family of Mr. Peter Adams created this Life Tributes page to make it easy to share your memories.

Send flowers to the Adams family.