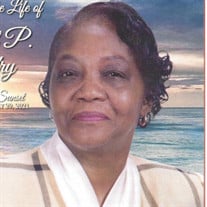 Rachel Pearl Landry was born on April 19, 1935, in Clarksdale, Mississippi, to Jake and Reola McIntosh. She was the oldest of four children, two of whom preceded her in death. Rachel was educated in the Mississippi school system and attended Milwaukee Area Technical College (MATC) in Milwaukee, Wisconsin. Rachel was employed by the United States Postal Service (USPS) for 23 years, until she was fortunately able to retire at the young age of 53. She certainly enjoyed her retirement years by gardening and attending church regularly. Rachel married (the late) Gilbert Smith, and three children were born from this union: Ruby Jean Smith,Jake (Renee) Smith and Michael (Cheryl) Smith. In 1971, she married Eugene Landry, and two children were born from this union: Beverly (Elizar) Gonzalez and Marvin Landry. This union lasted for 32 years until Eugene's death in 2003. Rachel accepted Christ at an early age. She joined Metropolitan Missionary Baptist Church in 1965, under the leadership of Rev. Elbert M. Kelly, Sr. She loved working in the church and cherished praising the Lord. Rachel faithfully served as an usher for many years and also served on the general mission team. After she retired, Rachel was able to make evening choir rehearsals; therefore, she joined the Gospel Chorus where she enjoyed leading and singing worship songs. In addition, she served as a Chaplain and conducted bible study for women at the Milwaukee County jail for several years. Rachel P. Landry passed away peacefully on July 29, 2021, at Thrive Rehabilitation Center in Mundelein, Illinois, at the age of 86. She was preceded in death by her loving husband, Eugene Landry; eldest daughter, Ruby Jean Smith; her youngest son,Marvin Landry; parents, Jake and Reola McIntosh; sister, Mildred (Frank) Brown; brother, Levernon McIntosh; and one grandson, Kenny Smith. Rachel leaves to cherish her memory: one sister, Bessie (James) Bilberry; children, Jake (Renee) Smith, Michael (Cheryl) Smith and Beverly (Elizar) Gonzalez; "bonus daughter," Chery Hill, who was devoted to her for more than 40 years; eleven grandchildren, ten great grandchildren, five great-great grandchildren; and a host of nieces, nephews, other family and friends.

Rachel Pearl Landry was born on April 19, 1935, in Clarksdale, Mississippi, to Jake and Reola McIntosh. She was the oldest of four children, two of whom preceded her in death. Rachel was educated in the Mississippi school system and attended... View Obituary & Service Information

Send flowers to the Landry family.