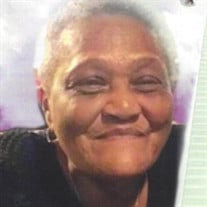 Ramona {Mona} Maria Reed was born October 20, 1952 to Mildred and Robert Reed of Milwaukee, Wisconsin. Mona received her formal education from the Milwaukee Public Schools. She was raised Catholic and accepted Christ at an early age. Milwaukee VA Medical Center was where she worked for 27 years as a Food Service Worker where she was adored by many co-workers who kept in touch after retirement. Mona loved the company of family and friends as much as they loved her. Walmart, spades, Potawatomi, and talking junk were her favorite pass-times. Her macaroni salad was requested at all family gatherings where she was the life of the party and the 1st person to arrive and the last person to leave. As stated by, her brother Brian (Chip), "she lived like she drove, the way she wanted to". She was a person that said what she felt whether good or bad. She had a strong presence, and it will be challenging to live without her. Mona departed this life Friday, May 7, 2021 and was preceded in death by parents, Mildred and Robert Reed and one son Craig Brian Reed. She leaves to cherish three daughters: Lisa Reed (Charlotte, NC), Lea Reed {Dallas, TX} and Mia Reed {Milwaukee, WI}; two sisters: Linda Mosley and Sherri {BJ-Bennie} Daniels; four brothers: Brian Reed, Ralph {Adraine} Reed, Randy Reed and Robert Reed; six grandchildren: Samone, Ashley, Ladana, Kalia, Kameron and Dorrien; three great-grandchildren: Ci'Khia {best friend and traveling buddy}, Chy' Aim and Akeel, a gang of nieces of nephews; two aunt's: Molly Hartley and Joy Crayton and a multitude of family and friends.

The family of Ms. Ramona Reed created this Life Tributes page to make it easy to share your memories.

Send flowers to the Reed family.