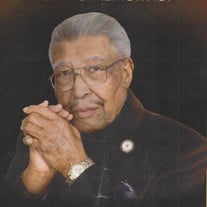 Raymond Conley, Sr. was born March 8, 1925, to the union of Jesse Conley and Alberta "Vick" Conley in Wilmot, Arkansas. He was their last surviving child. Raymond received his formal education in the Arkansas public school system. Despite racial disparities and other obstacles during those times, he was adamant about his education. He even walked five miles daily to attend school. Raymond completed nine years of school prior to his military draft. He later returned to Wilmot where he completed the remaining three years of high school coursework while attending vocational school. Anyone that knew Raymond could attest that he was a man of great faith. Accepting Christ as his Lord and Savior early on. He was baptized at Second Baptist Church in Wilmot at a young age. He served the church in many capacities, but most notably as deacon and superintendent of Sunday school. Throughout the years, he remained a devoted and faithful Christian. Even as he aged and his health declined, he continued to be a faithful churchgoer. He was an avid Bible reader; beginning and ending each day reading scriptures. Raymond was drafted by the United States Army during World War II where he spent most of his time in Southeast Asia overseeing a group of 6 to 8 prisoners of war. He was a marksman and responsible for maintaining roads going into China. He ended his military obligations as Private First Class and was honorably discharged in 1946 after two and a half years of service. During that time, he received several awards and decorations including the Bronze Star Medal for bravery, World War II Victory Ribbon, Army Good Conduct Medal, American Theater Campaign Ribbon, and Asiatic-Pacific Theater Ribbon. After being discharged from the military in 1946, Raymond returned home where he married his childhood sweetheart Furtis Robinson of Jones, Louisiana. Raymond and Furtis' union was blessed with fifteen children. Raymond earned his living as a sharecropper, school bus driver and forklift operator at Georgia Pacific. He retired from Georgia Pacific in 1987 at the age of 62. After Furtis' death Raymond later went on to marry Shirley Freemon of Memphis, Tennessee. To know him was to love him. He was very personable; the type to never meet a stronger. Raymond loved conversing with others. He loved sports especially baseball, playing pool, darts and dominoes. At night, he enjoyed watching old Western movies. His most precious pastime however was spending time with family. He grew to be the Patriarch of our family. The last of his generation. Leaving a legacy of character and faith to live on through those who were fortunate enough to experience him. His juxtaposed qualities of having faith in moments of doubts, being strong in the midst of weakness and remaining brave in the midst of challenges served as a blueprint to all whose lives he touched. On April 21, 2021, God sow fit to call Raymond home. He peacefully transitioned to eternal life at the Veteran's Hospital in Milwaukee, WI surrounded by loved ones. Raymond was preceded in death by his parents; Jesse and Alberto Conley, siblings; Ruby Daniels, Henry (Slop), DC, Cecil, Lela Weaver, Jessie Mae, Della Braggs, Edd, Hermon and Cloman; late wives Furtis and Shirley; children Donald Roy, Raymond Jr.. Gloria Mayfield, and Alfred Roy. He leaves to cherish his precious memories: his loving children, Bobbi Green of Bastrop, LA Jock (Willean) Conley of Milwaukee, WI, Loyce (Larry) Robinson of Mt. Juliet, TN, Dorothy Mitchell, Lauretta (Jerry) Waters, Helen (Ozie) Callahan all of Milwaukee, WI, Thurmon (Lora) Show of Wilmot, AR, Felton (Brenda) Conley, Gregory (Kathy) Conley, Patrick (Sherron) Conley, Eva Duncan all of Milwaukee, WI, Barbaro Conley of Las Vegas, NY, Michael (Bonito) Conley of Allen, TX, and Anthony Conley of Fort Worth, TX, a host of grandchildren, great- grandchildren, great-great-grandchildren, nieces and nephews. "A great soul serves everyone all the time. A great soul never dies. It brings us together again and again." -Mayo Angelou

Raymond Conley, Sr. was born March 8, 1925, to the union of Jesse Conley and Alberta "Vick" Conley in Wilmot, Arkansas. He was their last surviving child. Raymond received his formal education in the Arkansas public school system. Despite... View Obituary & Service Information

The family of Mr. Raymond Conley Sr. created this Life Tributes page to make it easy to share your memories.

Send flowers to the Conley family.