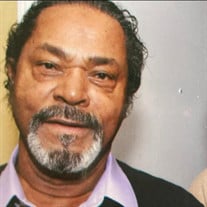 SUNRISE: Reginald Lee Lawrence, Sr. was born January 29, 1944, to the union of William Lee Lawrence II and Ruby Mae Lawrence in Milwaukee, WI. Reginald received his formal education at West Division High School in Milwaukee, WI. He then joined the Marine Corps where he served as a Lance Corporal with an expertise in rifle sharp shooting. Reginald accepted Christ as his Savior at an early age. SUNSHINE: Reginald also known as "Reggie" boasted multiple professional talents. After his deployment in the Marines, Reggie worked as a machinist at General Electric (GE). He was later employed with Milwaukee County Transit. Reggie also worked with his brothers at Ebony Builders LLC where he showcased his carpentry skills. In 2019, he attended an Honorary Service at Williams Temple COGIC in which he was recognized for his stellar workmanship in the church building. Reggie could fix or build anything one could imagine. One of Reggie's most favorite past times included watching CNN World News and keeping everyone updated on world events. Reggie was the life of any party and known for his "dessert first" request. Reggie loved family time. He participated in all holidays, birthday, and personal and professional celebratory accomplishments. Reggie shared a special bond with his children and grandchildren. They all had their own special unique relationship with their father and grandfather. He made certain they all knew they were an important part of his life, and he was there for them in any capacity in which they needed him. The memories created will last them all a lifetime. Reginald Lee Lawrence "Reggie" was a true gentleman. His outspoken honesty was a trait we all loved him for as well as the nicknames he gave his loved ones. Reggie was a great husband, father and grandfather and will be missed by all who had the opportunity to know him. SUNSET: Reginald departed this life on Friday, August 27,2021. Reginald was preceded in death by his parents, William Lee Lawrence II, Ruby Mae Lawrence, and his brother, Richard Lawrence. He leaves to cherish his memory: wife, Frances Lawrence; children, Reginald Lawrence II (Pandora), Dawn Lawrence, and Kelli Hollins (Terry Sr.); grandchildren, Brittney Rodriguez (Robert), Terry Hollins, Jr. (Shontele), K.J. Hollins, Kayla Hollins, Taylor Hollins, and Kaela Lawrence; thirteen great grandchildren; one sister, Cheryl Watkins; three brothers, Ronald Lawrence (Lillian), William Lawrence III (Arlene), and Rodney Lawrence. He will be remembered by his former spouse, Thula Lawrence, (mother of Reginald II and Dawn); and a host of nieces, nephews, and cousins.

The family of Mr. Reginald L. Lawrence Sr. created this Life Tributes page to make it easy to share your memories.

Send flowers to the Lawrence family.