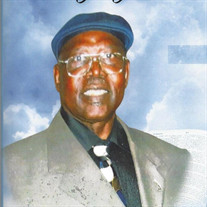 Richard White was born on February 7, 1934, to the union of Luciush and Savannah White in Greenville, Mississippi. Richard received his formal education at Marks Industrial School in Marks, Mississippi. Richard accepted Christ as his Savior at an early age and was later united with Central Church of Christ where he served as a faithful member for many years. He was originally employed by Teletype of Skokie, Illinois and later became self-employed as a mechanic for many years until his retirement. In his leisure, he enjoyed sitting in the garage working on different projects. He also loved playing pool. Richard White departed this life on December 6, 2020. He was preceded in death by his parents, Luciush, and Savannah White; brothers, Lewis, Roy, and J .W.; sisters, Prince Ella, and Nancy. He leaves to cherish his memory: wife, Bernice; son, Kevin; daughters, Linda Faye, Alva, Audra (Roy), Cassandra, Regina, LoriAnn, and Dayna; stepsons, Greg, and Jeff; sisters, Cora, and Queen Ester; brother, Ed (jerri), and a host of grandchildren, great grandchildren, nieces, nephews, other relatives, and friends.

The family of Mr. Richard White created this Life Tributes page to make it easy to share your memories.

Send flowers to the White family.