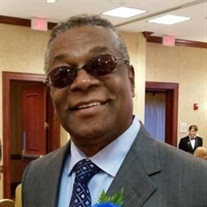 Robert Henry Cargile, Sr. was born on December 12, 1945 to the union of James Sr. and Louella Cargile in Milwaukee, WI. He was the third of six children to this union. Robert received his early education at Fifth Street Elementary School and attended middle and high school at North Division School in Milwaukee, WI. He furthered his education and received his bachelor's degree at the University of Wisconsin Milwaukee. Robert accepted Christ as his Savior March 14, 1990 at Falls Baptist Church. He later joined New Testament Church of Milwaukee, where he was an active member for over 13 years. On May 22, 1965 Robert was happily united in holy matrimony with his high school sweetheart Sheila Covington in Milwaukee, WI. Their union lasting a loving 56 years, was blessed with three children. Robert Cargile was a man of the people. He represented his community well in every space that he was in. He made sure that his wife and family were happy, loved, and did not want for anything! The kids in the neighborhood looked up to him and he was a father figure to many. He was active in sports and played football with the youth. He impacted everyone that he met. Robert was employed by A.O. Smith, Wisconsin Bell, Payne and Dolan Construction, M&I Bank, North Milwaukee State Bank, and American Family Insurance where he retired. He owned Divine and Able Transportation Company. In his leisure he enjoyed golfing, coaching, exercising, and mentoring young men in the community. Robert loved hosting his annual summer party where he enjoyed dancing, socializing, making people laugh, and bringing joy to his peers! Robert was known for his athleticism and was later inducted into the Hall of Fame at North Division. He was the Vice Chairman for Greater Holy Temple Christian Academy and was a regular contributor to New Concept Self-Development Center, Inc. Robert Henry Cargile departed this life on May 7th, 2021 where he joined his mother Louella Cargile, father James Cargile Sr. and brother-in-law William Johnson. Robert leaves to cherish his precious memories: his wife Sheila Cargile, children: TeAngelo Cargile Sr. (Caroline), Rochelle Sellers, Robert Cargile, Jr.. Chauncey Cargile Sr. (Yolanda), siblings: James Cargile Jr. (Marti), Helen Cargile Johnson (William), Dr. Samuel Cargile (Frankie), Alvin Cargile, and Percy Cargile(Ada). He is Pawpaw to: Tiara, Jasmine, TeAngelo Jr. (Kahina), Simeon, Shemia, Anthony, Rilla, Emily, Chauncey Jr.. Eric, Shani, and Chef, a host of great grandchildren, nieces, nephews, cousins, other relatives, and friends.

Robert Henry Cargile, Sr. was born on December 12, 1945 to the union of James Sr. and Louella Cargile in Milwaukee, WI. He was the third of six children to this union. Robert received his early education at Fifth Street Elementary School and... View Obituary & Service Information

Send flowers to the Cargile family.