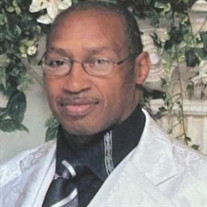 Ronald Miles Hammonds was born October 5, 1950 to Miles and Mary Hammonds in Milwukee, WI. Ron, as he was known to many, attended North Division High School in Milwaukee, WI before enlisting in the U.S Army on November 30, 1968. As a Specialist in the U.S Army, Ron served his country with honor and integrity. After Ron completed his committed service, he had many war stories to share with his family and friends; he was proud of his service to the Military. Ronald was honorably discharged from the Army on November 27, 1970. Ronald Miles Hammonds accepted Christ as his Savior at the age of 9 years old and was united with True Vine Missionary Baptist Church. Ronald was united in holy matrimony with Barbara Clark on December 16, 2000 in Milwaukee, WI. Ronald was employed by Alton Boxing for 5 years. In his leisure time, Ron loved playing chess and going to the Clinton Rose Center to talk to his friends he grew up with in his neighborhood. Ronald Miles Hammonds, a Veteran of the Vietnam War and longtime resident of Milwaukee, WI, passed away unexpectedly on June 25, 2021, surrounded by his family at home. Ronald's family has organized a memorial service to honor his life and Military service. Ronald Miles Hammonds departed this life on June 25, 2021. He was preceded in death by his parents Miles and Mary Hammonds, sister Lucille Ford and grandson Jerry D. Davis Jr. He leaves to cherish his memory with his wife Barbara Hammonds of 20 years; his son Ronald Wilson; daughters Linda Clark, Dr. Gena Clark-McKnight (Damione McKnight), and Demetria Rhodes; five grandchildren, Lakendrick Clark, Brian Day, Darian Day, Dimitrius Day, and Bianca Day; one great grand-daughter, Jerriasia Davis Harmon; two sisters Mary (Willie) Walker, Arlean (Richard) Hardy; and one brother, Leon (Geraldine) Hammonds, and a host of nieces and nephews. Ron had plenty of friends who he hung out with for many years. Frank Ford was one of his great friends he grew up with. He also leaves to cherish a special friend, Charles Martin, who he saw weekly. Charles and Ron loved playing chess, he'd beat the pants off of him almost every game. Ronald Miles Hammonds will truly be missed ..

Ronald Miles Hammonds was born October 5, 1950 to Miles and Mary Hammonds in Milwukee, WI. Ron, as he was known to many, attended North Division High School in Milwaukee, WI before enlisting in the U.S Army on November 30, 1968. As a Specialist... View Obituary & Service Information

The family of Mr. Ronald Hammonds created this Life Tributes page to make it easy to share your memories.

Ronald Miles Hammonds was born October 5, 1950 to Miles and Mary...

Send flowers to the Hammonds family.