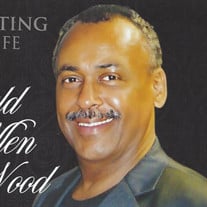 Ronald, lovingly known as "Ronnie" passed away on Wednesday, January 5, 2022, in Olathe, Kansas at the age of 71. He is survived by his loving wife, Thelma; two wonderful sons, Damiyon of Milwaukee and Marques (Veronica) of Texas; and daughter, Tia Santiago of Milwaukee. He lovingly referred to Contessa Davis of Iackson, Mississippi and Rashima "Rocky" (Lucia) of Olathe, Kansas as his "Bonus Children': He is further survived by his two sisters, Brenda A. Wood Dumas (Albert Sr.) of New Orleans, Louisiana, and Corliss D. Wood of Milwaukee; one brother, Bruce K. (Dorothy) Wood of Milwaukee; seventeen grandchildren Damiyon Wood, [r., [a'Nyla Wood, Neveah Wood, Marques Wood, [r., Joey Kingsby, Kenesha Green, Kendria Green, Sky Santiago, Angelo Santiago, [r., Brandon, Quinton, Xania, and Isaac Ward, including special granddaughters, Markasia Davis (Sharika) of Sachse, Texas and Raquel Kingsby of Olathe, Kansas; sister- in-law, Karean Darnell of Milwaukee; brother-in-law, James E. Marbury (Judy) of Kellyton, Alabama; and sister-in-law, Joyce Marbury of Oxford, Alabama. His parents, Rena and Edward Wood proceeded him in death as well as five other Siblings whom he loved and still grieved for: Dale, Edward [r., Verner, Michael and Carol Wood; and son, Ronald Allen Wood, Jr. Ronnie attended Hopkins Street Elementary, 21st Street School and North Division High School. He was an excellent student, especially in math and science throughout his school years. Growing up in The Boys Club community on 15th and Center, where his family still resides some 67 years later. Ronnie loved the club "Quarter Parties" and staying out all day on Saturday, watching triple movies, eating buttered popcorn, sour heads and Swedish fish. Ronnie loved his candy; till the day he passed, he had a variety stashed away. He had a God-Given talent as an artist. He drew cartoon characters and people with exceptional precision and likeness. He wrote calligraphy free-hand with no stencil. Ronnie further enhanced the design on the North Division senior class Blue Devil sweater for those seniors who wanted more of a creative flair. Ronnie was gifted in baseball and would have gone to college on a full-ride scholarship if it had not been for his "bum" knee. He was given the nickname "Foots" because of his size 15 shoe and his flat feet. Ronnie joined Calvary Baptist Church in Milwaukee in the early 1960's. His parents, Rena B. Kleckley Wood and Edward L. Wood made sure each of their children would come to worship and praise God for themselves. Ronnie, mature and encouraged, joined Christ The King Baptist Church on February l O, 2002. He was a member until 2006, when he and Thelma relocated to Olathe, Kansas. Ronnie was a Facebook "Junkie': He was like a kid going to web sites that had jokes, magic and special effects. He shared this with his Facebook friends. He was also a collector of fine watches and had many in his collection. Ronnie was a lover of music, especially jazz. He spent hours listening to various artists. Ronnie enjoyed going out to restaurants and eating great food. He would surprise Thelma with lunch and dinner reservations on any given day. On special events, holidays, birthdays, sympathy, get well, etc., Ronnie spent hours and days searching for that special card to give to that special person. One would feel honored to receive a card from Ronnie. His mother had this special gift to match the qualities and values of a person to what was written in the greeting card. One could guess that the apple doesn't fall far from the tree. Ronnie was employed for 26 years as a transit driver for Milwaukee County. He retired in 2006. Annually, on Valentine's Day, Ronnie would purchase delicious chocolates for the female Transit Authority staff. This gesture of kindness was appreciated by all. Ronnie and Thelma dated for 10 years before they were united in holy matrimony in 2005. They were married for 16 years of the 26 years they were together, Ronnie affectionately referred to Thelma as "Puffy': Ronnie will see his Thelma again, to which he softly replies, "Oh Yeah"!

Ronald, lovingly known as "Ronnie" passed away on Wednesday, January 5, 2022, in Olathe, Kansas at the age of 71. He is survived by his loving wife, Thelma; two wonderful sons, Damiyon of Milwaukee and Marques (Veronica) of Texas; and daughter,... View Obituary & Service Information

Ronald, lovingly known as &quot;Ronnie&quot; passed away on Wednesday,...

Send flowers to the Wood family.