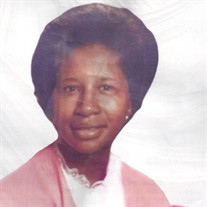 On Saturday, August 14, 2021, Rosa Mae Cameron passed away at the age of 73. Rosa was born Rosa Mae Trotter on August 20, 1947, in Hattisburg, Mississippi. She grew up in Forrest County before relocating to Milwaukee, Wisconsin, in 1965 at the age of 18. In the early 1970's, she married Robert Cameron. Soon after, she became a widow in 1976. Rosa was prececed in death by her father, "Pappy" Gardener; mother, Gracie Trotter; brothers, Ira Terrell, Robert Terrell, Isaac TerrelL and Clarence Terrell; sisters, Bernice Jefferson, Maime Smith, and Catherine Williams and son, Patrick Perine. She leaves to cherish her memory: beloved brother, James Trotter; sons, Reginald Perine and Corey Harris; daughters, LaZanda Moore, LaRosa Allen, Robin Bennett, Chewatawnie McDuffie, Chrisha Minnifield, Chifawndie Duncan, and Chontanite Robinson; beloved grandchildren, O'neil Perine, Majah Perine, Regine Perine, Kemari Moore, Ashani Moore, Ayelia Moore, Kashi Govan, Shaquisite Allen Shaquaze Allen, Shaquise Allen, Ramiyah Bennett. Teoncea Bennett, Nyleiya Bennett, Solaiya Bennett, DeShawn Luckett, Deveon Luckett, Jalaia Grier, Keishawn Robin, Jayland Robinson, Coricha Harris, Cory Harris, Jr., Naomi Minnifield and Sophia Minnifield; and great grandchildren, (Majah's 3, Regine's 1, Shaquisite's 1, and Shaquaze's 1). Rosa Mae Cameron devoted the majority of her life to improving and maintaining the quality of r e for the residents of the inner city of Milwaukee, Wisconsin, where she also resided. Her desire to make a change and improve her community, propelled her into becoming a dedicated community activist. Rosa began her legacy from her h e as she became the Block Watch Captain of her neighborhood. Soon Thereafter; she expanded her outreach to a few surrounding neighborhoods and then Williamsburg Heights Community Block Club Association was developed in 1997. Rosa founded the Williamsburg Heights Community Block Club Association as the need to reduce crime, empower the youth through recreation and social programs to become more of a priority. Always outspoken, Rosa utilized every resource available to restore peace and a sense of togetherness within the neighborhoods of the inner city. She collaborated with police liaison to implement the National Night Out campaign, the annual community-building event that helped to promote police-community partnerships and neighborhood camaraderie, making the central city a safer place to live. She worked tirelessly at improving the quality of life in the community through public service programs such as trash pickup, grass cutting and snow removal, the lead paint abatement program, and other programs, such as the Urban Renewal Project designed to improve the conditions of central city housing. For many years, Rosa worked with the Community Development Committee, the Social Development Commission and Northcott, in collaboration with the Next Door Foundation, the Boys and Girls Club, the Milwaukee Public School System, and the Milwaukee Police Department along with prominent city officials to help to provide the community with the finances needed to improve the overall quality of those services rendered. Her commitment to the community expanded from the North of W. Capitol Dr. to the South of W. Keefe Ave.; and from the East of Holton St. to the West of Hwy 43 in Milwaukee where made a deep impact on the residents and businesses in that area. Rosa was not only a devoted community activist, but also an advocate for at-risk youth, while working for the community. She actively worked as a foster care parent to several disadvantaged children throughout her lifetime. She collaborated with the Hunger Task Force to provide families with free turkeys at Thanksgiving. She worked with Toys for Tots to provide toys to unfortunate children at Christmas. She implemented the Back-to-School programs that provided youth with school supplies and free haircuts. She initiated the free breakfast and free lunch programs for the youth during their summer break. She also ensured that recreational programs and activities were in place for after school and during summer to help to keep the youth off the streets, while also unifying a strong bond between the youth and the police department through annual community block parties. Rosa Mae Cameron became one of few African American women city officials in the state of Wisconsin. As Alderwoman, she continued to assist in raising funds in the community to help build better housing, and to fund at-risk youth awareness programs, mentoring and tutoring programs, hunger programs, after school programs, and continuing education programs for adults through the local libraries. She also worked with daycare services to help establish the WIC program to provide free milk for infants. Rosa had always had a passion for service. She provided a better life for many families during her time and continued to serve as a member of her church, Holy Temple First Born MBC. She also continued her service through volunteering at other churches and food pantries even after her retirement. No matter how complicated the task, she always found a way to tackle the challenge. Rosa's unwavering dedication to her life's work impacted many throughout Milwaukee. From the block club captain of 12th Street and Atkinson Avenue, to the Alderwoman of the 10th district of Milwaukee county, she was a strong and resilient activist who overcame adversities to accomplish things in the community that will be felt and benefited by many generations. By maintaining rapport with crucial individuals and entities, Rosa helped build the foundation of many ongoing programs and resources that are in place today. So today we say goodbye to a great one; a legend of the central city community. But may we also have peace in remembering Rosa Mae Cameron's legacy, which will forever have an immense impact on the city of Milwaukee.

On Saturday, August 14, 2021, Rosa Mae Cameron passed away at the age of 73. Rosa was born Rosa Mae Trotter on August 20, 1947, in Hattisburg, Mississippi. She grew up in Forrest County before relocating to Milwaukee, Wisconsin, in 1965 at... View Obituary & Service Information

The family of Mrs. Rosa Mae Cameron created this Life Tributes page to make it easy to share your memories.

Send flowers to the Cameron family.