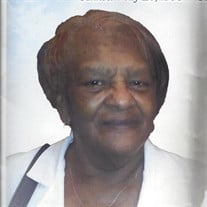 Rosie Thelma Taylor (nee Sommerville) was Earnest Dyson on May 20, 1938 in Stanton, Tennessee. Rosie Thelma Taylor was affectionately known as Thelma by friends, Momma by her grandchildren, and GG by her great grandchildren. Thelma received her primary education at St. Matthews Elementary, and she started her high school education at Gala 's Tennessee and eventually obtained her high school diploma after moving to Milwaukee, WI. Rosie Thelma Taylor was married was married to John Edward Taylor on on December 20, 1952 and they remained married until the passing of John Taylor, Sr. in July of 2002. Mr. and Mrs. Taylor had 5 children in as Tennessee. In the 1960s Mr. and Mrs. Taylor moved to Milwaukee, WI and had 5 more children. As a young child, Thelma accepted Jesus Christ as her Lord and Savior. She worked in various churches throughout her time in Milwaukee, WI and Mason, Tennessee. She was recognized as the Treasurer, Board Member, Greeter/Usher and cook over the years in church. At the end of her life, she was a mother at The Way of the Cross in Milwaukee, WI. Thelma was a lover of family. She loved cooking and preparing meals for her loved ones. Her home was notorious for hosting the best holiday gatherings where she prepared all of her family's favorite meals. She loved to sit and people watch on her porch. She was known in every neighborhood she lived in by name. Her favorite saying was "I may not have any money, but I can give you a roof over your head and food in your stomach." Thelma loved reading and doing crossword puzzles. Back in her early adulthood, Thelma was a lover of pool and was in a league in Milwaukee. Thelma worked various jobs through the years. As a youth she worked on her parents' farm. As an adult she worked at St. Vincent DePaul, and eventually retired from Mary Catherine Home after over 15 years of service in 2003. She went on to work at the Bucks Arena and her favorite basketball player was Ray Allen. Rosie Thelma Taylor departed this life on October 28, 2021. She was preceded in death by her parents; Mary Margaret Dyson and Earnest Dyson, her husband; John Edward Taylor, Sr., her children; Royal Taylor, Claudia Taylor, and Calvin Taylor, her grandchildren; Dale Taylor and Kenneth Newsom, and qreat qrandchildren: Dominique Parker and Mikaeyla Grant. Thelma leaves four generations to cherish her memory, with 7 children, Rose Lynn Taylor, John Edward Taylor, Jr., Mary Taylor, Margaret Diane Taylor, Elizabeth Jean Taylor, Mildred Denise Taylor (all of Milwaukee, WI) and Kimberly Dennen Taylor of Monticello, MS, 32 grandchildren, 106 great grandchildren, 29 great-great grandchildren and her brothers Ernest Dyson (Mavis) of Wauwatosa, WI, and Troy Dyson (Shelby) of Atoka, TN, her sister Betty Palmer of Milwaukee, WI, and along with many nieces, nephews, other relatives, and friends. Her many southern traditions and sayings were blessings and will be carried with us. Thelma was truly loved and will be missed by us all.

The family of Mrs. Rosie Thelma Taylor created this Life Tributes page to make it easy to share your memories.

Rosie Thelma Taylor (nee Sommerville) was Earnest Dyson on May...

Send flowers to the Taylor family.