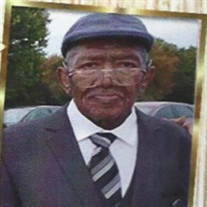 Roy Lee Briggs was born to the union of Hugh Lloyd Briggs and Elove Meyers the second oldest of 4 children. To that union, also born Virginia (Willie Lee Peoples), Dorothy Jean (James Nelson) and Fred (Fannie Mae). After the death of Elove Hugh Lloyd married Martha Willett and from that union carne Earl Lloyd (Claudia), Brenda Denise (Jose Figueroa), Debra Beatrice and Sheila Lenita (B T Williams). Roy had professed a faith in Jesus Christ at Corncob Baptist Church at an early age growing up with his grandfather as Pastor of the church. Roy was very close to his grandfather. In1951, at the age of 18 Roy moved to Memphis TN. It was during this time he met, dated and married the Love of his life, Veruetha Macon of Somerville TN. They were married for 42 years and had 6 children. The first child was a boy, they named him Larry Barclay, and after his birth they moved from Memphis to Milwaukee WI. Upon moving to Milwaukee, Roy Lived with Vernetha's aunt and uncle Freddie and John Cottrell and worked a variety of jobs, always excelling at his position. When he had earned enough money he sent for his wife and son. In 1957 He was hired at Brunner Corp (Merck) on 32 & Hampton, and he had an exceptional career as a journeyman machine operator and truck driver for 38 years. After arriving in Milw. 6 years later another son was born. Letdell Bernard 13 months later came daughter Coulette Veronica, 5 years later Lyndon Fitzgerald and 6 year later Tina LaShawn and 11 months later, Lamonte Ramon. The family continued to strive in the community and in 1990 both and Roy and Vernetha joined the Great Faith Progressive Missionary Baptist Church under the tutelage of Pastor Benjamin 1. Nabors. Soon after the whole family joined Great Faith, led by Roy's faith in God and his dedication to the church. Roy became prominent member of Great Faith as a trustee, Usher and all around mister fixit with his fellowship brother, Charles Blanchard. Charles and Roy were just like brothers always looking out for one another. After Vemetha's death in 1993. Roy continued to work until his retirement in 1995 from Brunner corporation and he was a faithful usher at GF all that time. In 2009 Roy was diagnosed with 2 debilitating diseases but he kept his faith in God always and had the same answer for anyone if you asked him how he was doing. (I'm fine). His strength and courage throughout his trials and tribulation are legend because he never complained once. Because Roy needed 24 hour care he moved to The Villa and he stayed there until 2018. He later moved to Alexian Village in the summer of 20 19 and he lived there until his passing on December 28th 2020. He was preceded in death by Father: Hugh Lloyd Briggs, Mother: Elove Briggs, Step Mom: Martha Briggs. Sisters: Virginia Peoples. Dorothy Jean Nelson. & Debra Briggs. wife; Vernetha Briggs. Son: Larry Briggs. Daughters: Coulette Kirkland (Terrance) & Tina LaShawn Briggs. Grandsons: Terrance Kirkland Jr. & Letdell Briggs II. He leaves behind to cherish his memory three sons Letdell (Sharron). Lyndon (Shirley) and Lamont (Freckie) Briggs. Grand children: Demian. Tina. Darchell. Larry Jr. Mari-Akeisla Cheree, Adelicia - Quanda. Mikhail. Isaiah. Zandell - Page. Tatiana, Tiara, Lyndon Jr. Christopher, Tyrin - Tamika, Terrence, Lamont Jr. Tynesha. Joelle, Janelle. Anthony. Many Great grand-children. bothers. sisters, nephews. nieces. cousins and friends.

The family of Mr. Roy Lee Briggs created this Life Tributes page to make it easy to share your memories.

Roy Lee Briggs was born to the union of Hugh Lloyd Briggs and...

Send flowers to the Briggs family.