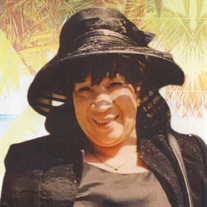 Ruby Jean Wilkes was born on December 20, 1940, to the union of Rubie Charles Carey and Hattie Ard in Jackson, Mississippi. Ruby received her primary education at Martin Elementary, and attended Jim Hill High School, where she was a track star in Jackson, Mississippi. After graduation from high school, she moved to Milwaukee, Wisconsin. Ruby accepted Christ as her Savior at an early age at Mt. Bethel Church of God in Christ where she sang in the choir and played the organ, in Jackson, Mississippi. Her grandfather, Reverend Josh Carey, was one of the founders of the church, and was Assistant Pastor under Reverend Johnson. Reverend Johnson was Ruby's pastor until she moved to Milwaukee. She was a member of St. Mary's Baptist Church, Providence Baptist Church, and Parklawn Assembly of God, all of which she sang in the choir. At Ruby's time of death, she was a member of Holy Redeemer Church of God in Christ, in Milwaukee. She was also a member of the 700 Club for over 30 years. Ruby was united in holy matrimony with Nathaniel Beverly Sr., in Milwaukee, Wisconsin, and their union was blessed with four children, Renee, Nathaniel Jr.. Jerome, and Ruben. Ruby remarried with Tommy Wilkes Jr. this union was blessed with two daughters, Toni and Carla. In her leisure, Ruby could always be found gardening and cooking. She loved to play tennis with her children and grandchildren. Ruby traveled extensively, Paris and Hawaii were her favorite destinations. Ruby could hear a song once, and then go over to the piano and play it flawlessly. She was also known for her beautiful singing voice. She worked at a host of nursing facilities and retired after 30 years from Sinai Hospital, where she worked as a Surgical Technician, and then a Nurse in the Operating Room. Ruby was preceded in death by her parents, Rubie and Hattie: brother, Richard Carey: sister, Barbara Ann Treadmill: and beloved children, Renee and Ruben. Those whom Ruby leaves behind to cherish her memory are two sons, Nathaniel Beverly Jr., and Jerome Beverly: her daughters, Toni (Alvin) Bates, and Carla Wilkes, all of Milwaukee, Wisconsin. Also three brothers, Leotha Thurman of Lathrop, California, Cullen (Butch) Carey, and David Carey (both of Milwaukee, Wisconsin. Her two sisters, Gwendolyn Collins of Atlantic Beach, Florida, and Bonnie Carey of Kalamazoo, Michigan: nine grandchildren, Latisha, Tarance, Porsche, Megan, Aaron, Demone, Jeremiah, Ivrin, and Timberlin: several great-grandchildren: and a host of many nephews, nieces, cousins, and friends who are among the many who loved and will miss her.

Ruby Jean Wilkes was born on December 20, 1940, to the union of Rubie Charles Carey and Hattie Ard in Jackson, Mississippi. Ruby received her primary education at Martin Elementary, and attended Jim Hill High School, where she was a track... View Obituary & Service Information

The family of Mrs. Ruby Jean Wilkes created this Life Tributes page to make it easy to share your memories.

Send flowers to the Wilkes family.