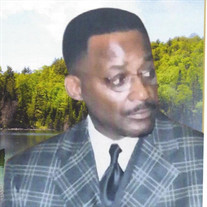 Rudolph Francise Bentley Sr. was born October 18, 1951 to the union of Willie Mae Fells and Thurston Bentley In Milwaukee Wisconsin. Rudolph received his formal education in the Milwaukee Public School System and later went on to attend the... View Obituary & Service Information

The family of Mr. Rudolph Bentley created this Life Tributes page to make it easy to share your memories.

Send flowers to the Bentley family.