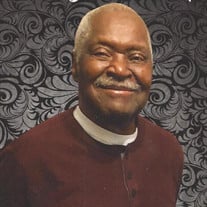 Samuel Stricklin was born to the union of the late Pastor James Wyatt Stricklin and Lucille Johnson Stricklin, in South Fulton, Tennessee. He received his formal education at Rosenwald Elementary School in South Fulton, TN and the former Miles High School in Union City, TN. He accepted Jesus Christ at an early age and united with New Hope Freewill Baptist Church in Union City, TN, where his father pastored. He would later unite with Greater Galilee Missionary Baptist Church in Milwaukee, Wisconsin, and then Siloah Evangelical Lutheran Church, also in Milwaukee, Wisconsin. Samuel enlisted in the U.S. Navy on 6/6/1951, and was awarded the China Service, United Nations Service, Korean Service, and the National Defense Service Medals, during his tour of duty. He received an honorable discharge on May 12, 1955. Samuel moved to Milwaukee, Wisconsin where he was united in Holy Matrimony on 10/17/1958, to the late Alice Yvonne Harris Stricklin. This union was blessed with a daughter and a son. He was employed with the Veterans Administration Hospital in Wood, Wisconsin, as a nursing assistant and then as a respiratory therapist. He retired from there after 35 years of service. Samuel was a horne handyman, enjoyed carpentry, and restoring furniture that other would throw out. He enjoyed the game of baseball, playing cards, and visiting with family and friends. He also loved singing in the choir and working with the Pilgrims of Siloah. Samuel was preceded in death by his parents, his wife of almost 47 years, six sisters, and six brothers. Those left to cherish his memory include: one daughter, Minister Willie Delbridge, of Woodbridge, VA; one son, Stephen Stricklin, of Milwaukee, Wisconsin; a devoted sister and caretaker, Josephine Stricklin, of Union City, Tennessee; one grandson, Jamaal Delbridge, of Woodbridge, VA; two great-grandchildren, Caleb and Abigail Delbridge, of Woodbridge, VA; two brothers: Leroy Stricklin of Union City, Tennessee, and Pastor W.P. Stricklin of Milwaukee, Wisconsin; two sisters-in-law: Ellouise Stricklin of Louisville, Mississippi, and Carolyn Harris Webb of Montevallo, Alabama; a goddaughter, Sabrina Hodnett of Milwaukee, Wisconsin; special nephew, Samuel M. Stricklin, of Union City, Tennessee; special neices: Gwendolyn King and Audrey Wells of Milwaukee, Wisconsin, and Valerie Rayford, of Montevallo, Alabama; a devoted friend, Mr. Hershel (Josephine) Adams, of Milwaukee, Wisconsin, and a host of nieces, nephews, cousins, and friends.

Samuel Stricklin was born to the union of the late Pastor James Wyatt Stricklin and Lucille Johnson Stricklin, in South Fulton, Tennessee. He received his formal education at Rosenwald Elementary School in South Fulton, TN and the former... View Obituary & Service Information

The family of Mr. Samuel Stricklin created this Life Tributes page to make it easy to share your memories.

Samuel Stricklin was born to the union of the late Pastor James...

Send flowers to the Stricklin family.