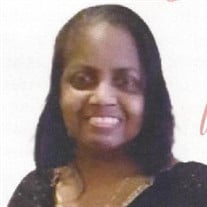 Sharlene Young was born October 19th, 1950. She was the first twin of Frankie M. (Walton) Young; and Grover T. Young in Belzoni, MS. Sharlene accepted Christ at an early age and joined the First Baptist Church in Belzoni where her father served as a Deacon. Later the family attended Green Grove Baptist Church. At the age of nine she and her twin sister Darlene were uprooted to Milwaukee, WI with the family. Later they joined Jordon Missionary Baptist Church. As an adult Sharlene moved her membership in 1978 to Calvary Baptist Church until God called her home. Sharlene attended Palmer Street Grade School and Lincoln Jr. and Sr. High School in Milwaukee, WI and MATC in Milwaukee, WI. In September of 1975, Sharlene attended MATC for two years and received an Associates Degree and Associate of Arts, she later went on to receive her degree in Respiratory Therapy. She continued her education and received her Bachelor of Art degree in Business Administration from Lakeland College and in 2007 she received her Master's Degree in Health Service Administration from the University of Sf. Francis in Joliet, IL. She was employed at St. Michael's Hospital for 29 years as the interim manager in 2005 until the hospital closed in 2006. She worked for St. Mary's hospital for 15 months as a therapist 1990-1991. She worked at Community memorial Hospital after the closing of St. Michael's. Sharlene volunteered for Jr. Achievement and other community services. She was an entrepreneur - licensed Real Estate broker and worked with United Realty for many years. She taught at Sanford and Brown College and Bryant and Stratton in Milwaukee as a Medical Terminology Instructor. Sharlene loved traveling - Hawaii, Belize, South Africa, China, Jamaica, Milano, St. Thomas, etc. Sharlene was very active on the usher board at Calvary Baptist Church where she served faithfully. She was the president for many years, she was on the Trustee Board for a year and worked with vacation bible school during the summer. She was involved at the state and nation level as a youth usher supervisor, she was the state secretary for a term and was very active in the National drill team and floor competition for many years. Sharlene was a servant leader. She gave her all until she become ill and was no longer able to serve in the capacity she was accustomed to. Sharlene was preceded in death by her father Grover Thomas Young, mother Frankie M. Phillips, Step-Father Charles Phillips who raised her and her siblings when they came to Milwaukee, WI, Grandmother Beatrice Walton, brothers James Willie Young, Bennie Earl Young, David L. Young, Robert L. Young, and February 2nd, 2021 Edward Lorenzo Young, sister Venola Young and several aunts and uncles, nieces and nephews. Sharlene's mother passed away October 9th, 2014 while she was hospitalized. Sharlene leaves to cherish her precious memory three children: Trecie D. (Sid) Bolton, Des Moines, IA, Terrina A, Allen, Kevin L. (Camille) Young and her most precious joys of her life her seven grandchildren: Vance J. Allen, Jr., Vaniece M. Allen, Marqus L. McGlothan, Symone R. McGlothan, Monique D.Young, Kenzell L. Young, and laniya M L. Smith. Four great grandchildren - Majai Rose Hamilton, Numa Roe Allen, Kayden McGlothan and Austin Young, Marlee Young, Kensli Young. Brothers: Fred (Louise) Young, Bellwood IL, Charles E. Phillips, Jr., Isaac L. Phililips all of Milwaukee, WI, Sisters: Mary L. Hill, Darlene (Robert) LaGrant, Belinda Jett. and Gloria Phillips, all of Milwaukee, WI. Sister Iphogenier Barry (Dallas, TX). Sister-in- law, Ernestine Tyler - Walton, and her favorite sister-in-law Denise Royalty. Her most precious niece and nephew whom she brought to church each Sunday, Shavonte' Phillips and Isaac L Phillips, Jr., and a host of other nieces and nephews, cousins and many friends especially Claro. A SPECIAL NOTE FROM SHARLENE: To the most wonderful usher board in WI. I love you all. Continue to serve the Lord. I would like to thank the following people who were there for me during my hospitalization and at home: my vice-president Nancy Davis who took charge of the Usher Board. My twin sister, Darlene LaGrant and my sister Denise Royalty. My best friend Claro Chapman and Lovern Mckinney were there for me during my recovery at home and my daughters and son who helped me with my medications. I love you all may God bless you all.

Sharlene Young was born October 19th, 1950. She was the first twin of Frankie M. (Walton) Young; and Grover T. Young in Belzoni, MS. Sharlene accepted Christ at an early age and joined the First Baptist Church in Belzoni where her father served... View Obituary & Service Information

The family of Ms. Sharlene Young created this Life Tributes page to make it easy to share your memories.

Send flowers to the Young family.