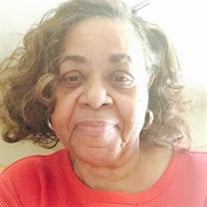 Sharon Lucy Toliver was born on June 23, 1947 to the union of Captain Minafee and Connie Minafee in Milwaukee, Wisconsin. Sharon Toliver received her formal education at North Division High School in Milwaukee, Wisconsin and went on to further her education at MATC for Cosmetology. Sharon Toliver accepted Christ as her Savior at four years old and was united with Love Tabernacle where she served as a mother of the church. In 1968, Sharon Toliver was united in holy matrimony with Duane Toliver in Milwaukee, Wisconsin. Their union was blessed with 6 children. She was employed by Trendsetters as a Head Beautician for seven years. In her leisure, she enjoyed sewing, reading books, crosswords, puzzles, making clothes, her family, and her favorite, going to Golden Corral. She loved talking to her sister Doll for hours, who was like her best friend. Sharon Toliver departed this life on January 1, 2021. She was preceded in death by her husband Duane Toliver. She leaves to cherish her memory: daughters, Shannon Toliver and Nikkole Toliver; sons, Jamal Toliver, Duane Toliver Jr. (Pookie), Cory Toliver, and Peter Toliver; sister, Shayla Minafee; brother, Bruce Minafee; grandchildren, Brieana Kimber, Cory Toliver [r, Taylen Toliver, Ajamu Toliver, and Duane Toliver III. And many more grandchildren, nieces, nephews, friends and family. Last words: "I'm going straight to the Father"

The family of Mrs. Sharon Ann Toliver created this Life Tributes page to make it easy to share your memories.

Send flowers to the Toliver family.