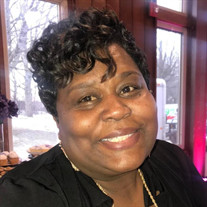 Sharon Denise Watkins was born on March 14, 1970, to the union of Earl Smith and Laverne Jones in St. Louis, Missouri. Sharon was Christian, a very spiritual being, often angelic, who lived to spread love, wisdom, and peace onto others. She... View Obituary & Service Information

The family of Ms. Sharon Denise Watkins created this Life Tributes page to make it easy to share your memories.

Send flowers to the Watkins family.