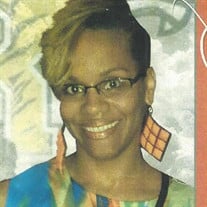 Sherlda Washington was born on October 20, 1978 to Pete Washington and Sylvia Mloragne in Chicago, Illinois. She moved to Milwaukee, Wisconsin in 1987 with her family while stili a young child. Sherlda accepted Christ at an early age and was baptized at Calvary Baptist Church by Pastor Silas Johnson in Springfield, Illinois. Once herfamily relocated to MlIilwaukee, Wisconsin, she joined the Mount Moriah Baptist Church under the leadership of the late Pastor Kenneth A. Bowen. Later in life, she found her church home at Mount Zion Baptist Church under the leadership of Pastor LouisE. Sibley, III. where she was a member until her death. Sherida received her formal education from Milwaukee Public Schools, graduating from Riverside University High School in 1996. Sherida continued her education, obtaining aBachelor of Science Degreefrom AIverno College in 2004 and a Master of Science Degree in Business Management from Cardinal Strltch University in 2007 .. Sherida was gainfully employed with the Centralized SpecialistTeam at Kohl's Corporate Center. . On August 12, 2006, Sherida was united in holy matrimony to Leon Davis, Esq under the ordination of Rev. James P. Moragne. Sherida was an active member in the church where she enjoyed being a part of various minlstries.includlng The Youth Choir, Sunday School, the L.E.G.A.C.YYouth Department, the Praise Team, and the Woman's Day Choir-where voucould hear her rendering selections such as "Encourage Yourself," "In God, There is No Failure," and "Jesus Will" When not serving the Lord, Sherida had a huge appetite and diverse palate, as she was always the first in line with a plate at Barbecues. She was. infarnous forBlack Friday shopping and finding good deals on the home shopping networks (HSN, QVC, J-TV ... ). Sherida was also a devoted wife, but most importantly a great mother who enjoyed taking her children to the movies, karate and swimming lessons. Her bubbly personality and highly infectious laugh will be missed by many; to know her was to Jove her. A Godly life ended on March 11, 2017, when Sherida Washington Davis was taken from us. We know she is at rest with our Heavenly Father. The Lord took her from all of the pain to a place where there isno pain, no burdens, and no tears. . the was preceded in death by her grandparents, Alex Brown and Ethel Brown and brother-in-law, Rashaan HObbs. Sherida leaves to cherish her memory: Grandmother, Mary Moragne of Chicago, IL; loving parents, Pete. Washington of Victoria, Texas and Sylvia (Rev. James) Moragne of Milwaukee, WI; three beautiful sons Rahfee Washington; Christopher and Michael Davis all of Milwaukee, WI; brother, Michael Washington, niece,TatianaWashington both of Milwaukee, WI; step-sister Shouna Angion of Chicago, IL;God-sisters, Tonja and Tahje Whittley, God-brother Pierce Grey of Milwaukee, WI; childhood best friend, Dorian.Hafernann of Dallas, Texas; special church friends Larissa Lampkins- Cobb and Talonda Lipsey-Brown; In-laws, Mother Lois Jones of Douglasville, GA, Brothers Marlon Davis and Atif (Jessica) Davis of Milwaukee, WI; and a host of family and friends.

Sherlda Washington was born on October 20, 1978 to Pete Washington and Sylvia Mloragne in Chicago, Illinois. She moved to Milwaukee, Wisconsin in 1987 with her family while stili a young child. Sherlda accepted Christ at an early age and... View Obituary & Service Information

The family of Mrs. Sherida Davis created this Life Tributes page to make it easy to share your memories.

Sherlda Washington was born on October 20, 1978 to Pete Washington...

Send flowers to the Davis family.