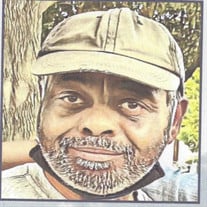 STANLEY GILLON, was born August 25th 1954, to the union of Theodore and Mary Lucy Gillon in Milwaukee, Wisconsin. On Monday, December 28, 2020 at 12:05 pm Stanley slipped quietly away with his life partner, Juanita Street, by his side after suffering a massive stroke a week prior. Stanley, affectionately known as "Stan the Man! ", attended Milwaukee Public Schools during his formative years. He spent a lot oftime with his sister Lydia as she would help her parents to raise him from birth and beyond. At a very young age, he realized his calling and love of fixing cars, remodeling homes, and repairing appliances, just to name a few. Stan would became a highly sought after self-taught Mechanic/Engineer to which he found satisfaction in tinkering with cars and anything that needed fixing. He will be remembered for his outgoing personality and warm & caring spirit. THE LATER YEARS: Stanley always had a love for a good home cooked meal; he was an excellent cook. Breakfast was by far his favorite meal with a great cup of coffee. He was also fond of great music in particular Smooth Jazz, "The Quiet Storms". In his leisure, you could find Stan sitting in the family room with his life partner of 21 years Juanita watching CNN gazing. Stanley spent every moment possible with Juanita shopping, cooking, site seeing and doing projects around the house. He really was a gentle giant who had a way of showing you he cared without saying many words. Stanley was preceded in death by his parents Theodore and Mary Lucy Gillon and Brother Jeff Gillon. He leaves to cherish his memory, his loving & devoted life partner Juanita Street; Two sisters Ernestine Harden and Lydia Toney, Brother Eugene Gillon; Five children Teresa (Freddie) Soles, Tonya (Steve) Towne, Maryland (Mark) Wiggington, Sophia (Demar) Wilder, and Stanley Bates; Two bonus children Tiffany Street and Devin Carter. (15) Grandchildren, (2) Great-Grandchildren and a host of beloved and devoted nieces, nephews, extended family and lifelong friends.

STANLEY GILLON, was born August 25th 1954, to the union of Theodore and Mary Lucy Gillon in Milwaukee, Wisconsin. On Monday, December 28, 2020 at 12:05 pm Stanley slipped quietly away with his life partner, Juanita Street, by his side after... View Obituary & Service Information

The family of Mr. Stanley Gillon created this Life Tributes page to make it easy to share your memories.

Send flowers to the Gillon family.