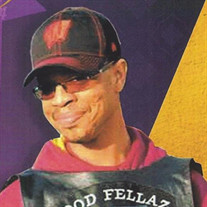 Stephan Javondae Lesure Sr (also known as Fonze and Steve 0) was born on Tuesday, Stepember 3, 1974 in Wauwatosa, Wisconsin to Gloria Lesure and Michael Baker. On Saturday, February 12, 2021 Stephan departed his life and gained his Biker wings in heaven. He had the pleasure of also being son to Beverly Baker and Will Hatcher. He was the oldest of ten Johnathan White, Reginald Pearson, Mandell Brandy (Crystal), Michael Buxton (jessica), Amy Bonner, Sheanell Brandy, William Hatcher, Eric Hatcher, Reginald Hatcher, and Jerome Hatcher. He was Preceded in death by Javon Buxton and Shirley Baker-McClennon. He graduated from Ethan Allen School and went on to further his education at ITT Tech, where he received his Bachelor's degree and his Master's from Capella University. Stephan excelled in Information Technology, recently working for Molson Coors where he worked as Sr. Manager of Information Security. On February 14, 1996, he married Donna Hampton at the age of 22. They then went on to have three beautiful children and five in total. His legacy continues on through Stephan Lesure Jr, Brianna Lesure, Isadore Fortson-Lesure, Mia Lesure and Ian Lesure. Stephan, Sr. also has two lovely grandchildren Aubree Lesure (Stephan Lesure jr) and Avery Johnson (Brianna Lesure). In his spare time he enjoyed going out on the water with his boat, spending time with family and was also an avid suit shopper. He was apart of the GOOD FELLAZ bike club and enjoyed EVERY laugh, EVERY ride and EVERY brother.

The family of Mr. Stephan Javonda Lesure created this Life Tributes page to make it easy to share your memories.

Send flowers to the Lesure family.