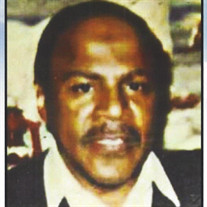 Sylvester "Sonny" Taylor was born April 16, 1937 in Pine Bluff, Arkansas to the late Jasper Taylor and Sylvia Walls Taylor. He transitioned to his Heavenly Reward on July 17, 2021. Sonny confessed a hope in Christ at a early age, at Mt. Nebo... View Obituary & Service Information

The family of Mr. Sylvester "Sonny" Taylor created this Life Tributes page to make it easy to share your memories.

Send flowers to the Taylor family.