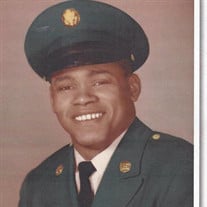 T.L. Lee was born on August 20, 1941, to Clytee McKee & Isaac T. Lee, Sr. in Pittsboro, Mississippi. He later changed his name to Thomas Lewis Lee. Thomas received his formal education from Bruce High School in 1960, in Bruce, MS. He received his Associates in Education and a welding degree from Milwaukee Area Technical College. Thomas accepted Christ as his Savior at age 12 and was united with Bridges Chapel Baptist Church. On January 25, 1966, Thomas enlisted into the United States Army. He was honorably discharged on January 9, 1968. He was employed by A.O. Smith/Tower Automotive as a Welder forever 32 years of service. In his leisure, he enjoyed fishing, hunting, gardening, making BBQ grills, leather crafts, photography, and creating things with his hands. He also loved blues and gospel music. He was a part of the Friendship Club, and a member of the American Legion in Portage, WI. He was also a member of Holy Temple Missionary Baptist Church in Milwaukee, WI. Thomas Lewis Lee departed this life on September 1, 2021. He was preceded in death by his father, Isaac T. Lee, Sr.; mother, Clytee Johnson; brother, Franklin Lee; and sisters, Martha Nell Bean, Francis Jean Petty, and, Woanda Ann Marble. He is survived by his former wife, Wansa L. Lee; their children, LaBina L. Lee-Mason of Little Elm, TX, Paulette R. Lee, and Monica A. Lee of Milwaukee, WI; granddaughter; Deja S. Mason of Madison, WI; grandson, Marion L. Harris of Fort Worth, TX; brothers, Isaac T. Lee, Jr., and George A. Lee. Sr. of Milwaukee, WI; his special friend, Mary Williams of Milwaukee, WI; he is also survived by many nieces, nephews, cousins and a host of other family members and friends. He had a message to loved ones: Be good and keep the faith.

The family of Mr. Thomas Lewis Lee created this Life Tributes page to make it easy to share your memories.

Send flowers to the Lee family.