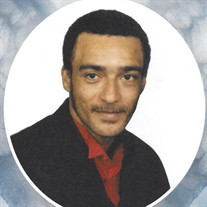 Timothy Dale Cocroft was born on June 24, 1957, to the union of Willie T. and Louise (Gee) Cocroft. He was youngest of six children. He entered eternal life on Sunday, March 20, 2022. Tim accepted Christ as his Lord and Savior at a very young age and became a member of Metropolitan Missionary Baptist Church under the leadership of Reverend E.M Kelly, Sr. Tim began his formal education attending Twentieth Street Elementary School, Robert Fulton Jr. High School and North Division High School. After graduation from high school, he secured employment at A.O. Smith/Tower as a welder. Tim was employed for over twenty-eight years, and we know from reliable sources, that he was a very hard worker and that he could really sling that steel. Tim was an avid sports fan. He loved to talk football and he loved the Packers. Timothy was incredibly wise and could always provide great advice. He had a heart of gold and was often the life of the party. He loved trivia games, watching old T. V. shows, listening to music and dancing. Most times if you saw him, he would be surrounded by children as they would flock to him because of his child-like spirit. Although he could often be found laughing and joking, he also had a serious side and no-nonsense attitude, especially when it came to his family and those he loved. If necessary, he was ready for a fight and that's exactly what he did until he took his final breath. Tim was preceded in death by his parents, Willie T. and Louise (Gee) Cocroft; brothers, Robert A. Cocroft and Mark A. Cocroft; daughter, Natasha S. Hampton; and granddaughter, Ana Moffett. He leaves to cherish his precious memory, his sweetheart, Janet Rhodes; the mother of his three daughters, Santana J. Cocroft, April S. Cocroft and Brandy J. Cocroft; son, Jamal Cocroft. He was a father figure to Delmonte McPhan, Kenneth Beasley and Alicia Hampton. He was a treasured grandfather of ten granddaughters and five grandsons, and a cherished great-grandfather of four. He was further survived by siblings: Phyllis T. (Woodrow) Coleman, Wanda D. Cocroft and Judy L. Cocroft, sister-In-law Jacqueline D. Cocroft; aunts, Florence L. Cocroft, Dorcas D. Denton, Helen F. Leflore and Callie Gee; uncle: Alton Campbell; as well as many beloved nieces, nephews, cousins and friends; childhood friends, Michael Edwards, Barry Mims, and Jeffery Triggs; adopted brother, Harrison (Shirley) Addison. "t have fought the good fight, have finished the race, / have kept the faith." 2 Timothy 4:7

Timothy Dale Cocroft was born on June 24, 1957, to the union of Willie T. and Louise (Gee) Cocroft. He was youngest of six children. He entered eternal life on Sunday, March 20, 2022. Tim accepted Christ as his Lord and Savior at a very young... View Obituary & Service Information

Send flowers to the Cocroft family.