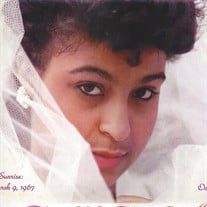 TONIA LA'FAYE FINDLEY was born on march 9, 1967, in Milwaukee, Wisconsin, to the proud parents of Ray and Florida Zolicoffer. Tonia professed a hope in Christ, at an early age and had a love for receiving the Word. she would travel, near and far, to receive a Word from men and women of God, whose teachings she admired. Tonia was a graduate of Washington High School, in Milwaukee, Wisconsin. Shortly after graduating, Tonia entered the workforce, utilizing her many talents, education and experience. Tonia furthered her education by attending school and obtaining certification in Hospitality Management, becoming a proud employee of the Marriot Hotel, for many years. Tonia, later, shifted her career interest and became employed with Miller Brewing Company, in Milwaukee, Wisconsin. In addition to Tonia's hard work and job dedication, she enjoyed life and believed in living it to the fullest, which included traveling, cooking, celebrating special occasions and, most importantly, being a mother to her four wonderful children. Tonia cherished many things but family was very important to her. She surrounded herself with positive family and friends and together they lit up the world with love and laughter. In 1991, Tonia was joined in holy matrimony to Stewart Findley and to this union two children were born. Tonia La'Faye Findley transitioned peacefully on Wednesday, October 11, 2017, at St. Mary's Hospital. She was preceded in death by her: parents, Ray and Florida Zolicoffer; one sister, Velma Zolicoffer; paternal grandparents, Lloyd and Laura Zolicoffer; maternal grandparents, Nick and Bette Phinisee; two special cousins, Nicky Phinisee and Dwayne Thomson; and a host of aunts, uncles and cousins. Tonia leaves to cherish her memories her: four children: LaBronte Coney (La'Trece), Anjelica Findley, Astasha Findley and Tru Cannon; four grandchildren: Yaya's Babies:Jaelen Coney, Aminah Felicelli, Madison Coney and Kira Alexander-Jackson; one brother, Ronny Zolicoffer (Faye) Sr.; four sisters: Ethel Williams, Audrey Zolicoffer, Levella Henderson and Jacqueline Zolicoffer; one special brother-in-law, Daryl Henderson; and a host of aunts, uncles, nieces, nephews, cousins and friends.

TONIA LA'FAYE FINDLEY was born on march 9, 1967, in Milwaukee, Wisconsin, to the proud parents of Ray and Florida Zolicoffer. Tonia professed a hope in Christ, at an early age and had a love for receiving the Word. she would travel, near and... View Obituary & Service Information

The family of Mrs. Tonia La'Faye Findley created this Life Tributes page to make it easy to share your memories.

Send flowers to the Findley family.