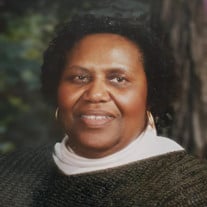 Vera Nell Marks was born on January 19, 1939 in Bogue Chitto, Mississippi to the union of (the late) Thomas Marks, Sr. and (the late) Inez (Gill) Marks. Vera was the middle child of five children from thi union. Coming from a family with strong Christian and family values, Vera accepted Christ at an early age. The children were all raised to have a deep love and devotion for God. Vera's early education was in the Bogue Chitto, MS Public School system. In 1958, Vera graduated from Lincoln County Training School. Following her graduation, Vera moved to Chicago, IL where she lived and worked for a year. After leaving Chicago, Vera moved to Springfield, MA, where she found a position designing women's hats. It was in Massachusetts, that Vera met the love of her life, Samuel McDonald Rogers, of Kittrell, North Carolina. On December 27, 1960, Vera and Samuel married. Their union was blessed with four children: Derek Van Rogers (deceased), Raymonda Rogers (deceased), Gabriel Lafaun Rogers and Shaun Desmond Rogers. In 1967, Vera, Samuel and Derek moved to Milwaukee, Wisconsin. Vera worked several jobs. She was a factory worker at Pereles Brothers, Inc. for many years. She was also a teacher's aide at Peckham Annex which was later renamed Jackie Robinson Elementary School. Vera saw the need of educating black children and decided while in her late thirties to pursue her college degree. While attending the University of Wisconsin-Milwaukee, she graduated with a Bachelor of Science Degree in Education. Vera began her teaching career with Milwaukee Public Schools in 1985, as a substitute teacher. In 1992, Vera received a full teaching appointment at Philipp Elementary School, where she taught fourth grade, until her retirement in 2001. Vera was family oriented. She loved her husband of sixty years, her children, family, friends and students. Vera was a wonderful loving mother, aunt and teacher, so generous with hugs and kisses. She adored her children and they adored her. Vera was a positive role model and educator. She did all she could do to encourage and support not only her children but the children within the community. Vera loved life and had several hobbies that she enjoyed. From early childhood she enjoyed fishing in nearby creeks in her hometown, as well as various locations in Wisconsin. Vera was also a lover of classical music; her favorite song was Clair De Lune by Claude Debussy. Vera loved flowers and plants. She was known to pinch off a little piece of a plant, in a mall, garden or restaurant, to take home and sprout roots. Then she would plant it in her own garden. These young plants flourished under her tender loving care. Vera was a wonderful adventurous cook, who could cook any kind of dish from Peking Duck to Sauerbraten. She loved cooking soul food; her fish fries, cornbread dressing and her banana pudding were legendary. She kept our home filled with the delicious aroma of food. Vera was a collector of elephant figurines. She loved how fiercely loyal elephants are and how well they protected their herd. Vera admired those traits for she was very loyal and protective over her family and friends. If you wanted a secret kept, you could tell it to Vera. She would keep your confidence, listen intently and give you wonderful advice. Never to judge, just to love unconditionally as outlined in 1 Corinthians 13: "The greatest of these is Love." Vera Nell Rogers went home to be with the Lord on January 10, 2021. She was preceded in death by her parents, one son, Derek Van Rogers; one daughter, Raymonda Rogers; and three brothers, James "Jimmy" Marks, Thomas Hercules Marks and Larry Marks. She leaves to cherish her memory: her beloved husband, Samuel Rogers; one daughter, Gabriel Rogers; one son, Shaun Rogers; one sister, Sadie Marie (Marks) Tillman of Atlanta, GA; two nieces, Robin Gayle (Arlyn) Lacking of Milwaukee, WI and Sheila Tillman Gafeney of Atlanta, GA; one nephew, Joe Tillman, Jr. of Atlanta, GA; one cousin, Mary Louise Marks of Springfield, MA; childhood friend/sister, Geanine Gatlin of Phoenix, AZ; two brothers-in law, Clarence B. Rogers of North Carolina and James L. Rogers of Virginia; one nephew, Steve Rogers of Georgia; dear friends, Ethel and Thomas Bell, Sr., Jackie Johnson and Mattie Tucker, all of Milwaukee, WI; and a host of nieces, nephews, cousins and friends. ''For lift and death are one, even as the river and the sea are one. In the depth of your hopes and desires lies your silent knowledge of the beyond; and like seeds dreaming beneath the snow your heart dreams of spring. Trust the dreams, for in them is hidden the gate to eternity." Author, Khalil Gibran Now unto him that is able to keep you from falling, and to present you faultless before the presence of his glory with exceeding joy, to the only wise God our Savior, be glory and majesty, dominion and power, both now and forever. Jude 1:24-25

Vera Nell Marks was born on January 19, 1939 in Bogue Chitto, Mississippi to the union of (the late) Thomas Marks, Sr. and (the late) Inez (Gill) Marks. Vera was the middle child of five children from thi union. Coming from a family with strong... View Obituary & Service Information

The family of Mrs. Vera Nell Rogers created this Life Tributes page to make it easy to share your memories.

Send flowers to the Rogers family.