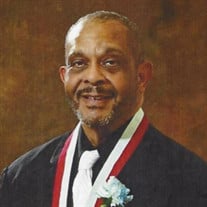 Wallace McClain Cheatham was born in Cleveland, Tennessee on October 3, 1945, to the union of Martin Luther and Ollie Frances (Simpson) Cheatham. Wallace accepted Christ at an early age. He began playing the piano for his Sunday School at Pleasant Grove M.B.C. and other area churches. His grandmother's employer recognized his musical talent and gave him free piano lessons. Those lessons began with simple melodies and developed into complex compositions. That was the beginning of his life-long love of including music in his life every day. Wallace received his Bachelor of Science degree from Knoxville College, an HBCU, in Knoxville, Tennessee. He later received a Master of Science Degree from the University of Wisconsin- Milwaukee (UWM). In 1982 he received his phD from Columbia Pacific University. The prestigious Honorary Degree of Fine Arts was awarded to him in 2002 by the University of Wisconsin- Milwaukee. Wallace developed his love of travel at Knoxville College when he played with the Concert Choir on tours. He was also a member of Operation Crossroads Africa and spent a summer building homes in Kenya. Later in life, as a member of the International Consortium for the Music of Africa & Its Diaspora (ICMAD), he lectured and played his own compositions in London, England. During one of his trips, his wife Faye assisted as his soloist when demonstrating his music, and then she later presented it in a full recital at the University of Cambridge in Cambridge, England. He traveled to Beijing, China with (ICMAD) where he was one of the featured lecturers. During this conference, his piano and vocal compositions were performed by his colleagues. His book Dialogues on Opera & the African American Experience and also his compositions have been translated into many languages. His music has been performed all over the world. For more than three decades, Wallace served as the organist for st. Mark AME Church. He was the pianist for the seven active choirs, played all of the service music, and served wherever he was needed. He often played for weddings, funerals, and community events. For the last fifteen years, he enjoyed being the organist for Living Hope Presbyterian Church. Wallace was a member of many organizations: Association Study African American Life and History, National Association of Negro Musicians, Wisconsin Alliance of Composers, American Choral Directors Association, Music Educators National Conference,American Guild of Organists (AGO), R. Nathaniel Dett Club, Knoxville College Alumni Hall of Fame, McDowell Club and phi Beta Sigma Fraternity, Inc. Wallace, also, relished working with community groups. He was the director of The New Jubilee Community Choir. He directed The New Jubilee Children's Choir and The New Jubilee Youth Chorale. For many years, he worked with the African American Children's Theatre. They all appreciated the time and energy he devoted to enhancing their own talents and love of music. His love of music extended beyond public performances, lectures, and professional organizations. Teaching was another way that he shared his talents. His teaching career began in the Tennessee Public School System. In 1968 he joined the Racine, Wisconsin Unified School District. It was in 1971 that he was hired by the Milwaukee Public School System and remained here until his retirement in 2003. When he had leisure time, Wallace enjoyed studying history, watching the news, and reading newspapers. Watching soap operas was also a favorite past time of his, and he was a wonderful storyteller. Wallace's family and friends will always remember him as the quiet and humble genius who enriched their lives. Wallace is survived by his devoted wife of fifty years Faye Watson Cheatham; daughters Tosca Cheatham Biles (Wesley) of Dayton, OH, and Kimberly Ann Cheatham of Morrisville, NC; beloved grandsons Grafton McClain and Mason Riley of Dayton, OH; brother Martin Cheatham of Las Vegas, NV; sister Vicki Bolden of Minneapolis MN; Uncle Thomas (Patricia) of Powell, TN; and a host of family, friends, nieces, and nephews.

Wallace McClain Cheatham was born in Cleveland, Tennessee on October 3, 1945, to the union of Martin Luther and Ollie Frances (Simpson) Cheatham. Wallace accepted Christ at an early age. He began playing the piano for his Sunday School at Pleasant... View Obituary & Service Information

The family of Dr. Wallace M. Cheatham created this Life Tributes page to make it easy to share your memories.

Wallace McClain Cheatham was born in Cleveland, Tennessee on...

Send flowers to the Cheatham family.